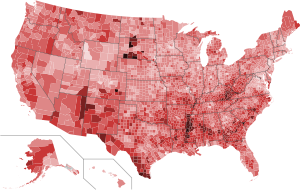 Last year the poverty rate was the highest recorded in 51 years.  Earlier this week personal finance site Mint.com published an interactive map to show how that poverty looks across the United States. The poorest states were in the South with states like Mississippi and Alabama.

So, how did New Jersey fare?  Actually, we are one of the top 5 states with the lowest poverty rates.  Before you go lighting up cigars with hundred dollar bills, let’s look a little closer.

The reason we are so low on the list is that we have a lot of extremely wealthy people living in very cushy towns.  On the other end of the spectrum, we also have some cities with very high poverty like Newark and Camden, the latter of which is one of the poorest cities in the US.  In a state book-ended by the large cities of New York and Philadelphia the rich-poor discrepancy is bound to be high.

Here is what I know.  Property cost is high, taxes are high, gasoline is high.  Lots of people I know are struggling to live paycheck to paycheck in New Jersey.  However, none of them would say they are living in poverty.

You can check out the Mint.com site here.