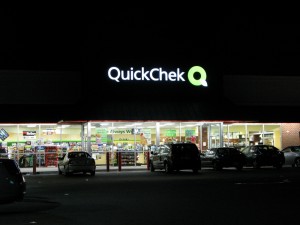 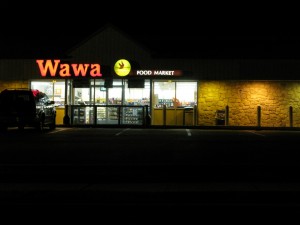 No rivalry is as heated in the North Jersey versus South Jersey war as the battleground between these two titans of convenience.   Families are divided and friendships are torn like the discarded lottery tickets strewn on the ground in front of these stores.   Which is better?

In this corner, wearing the red and yellow;  Wawa.  Founded in 1964 with around 570 stores in many mid Atlantic states.  In this corner sporting the green and the lighter green; Quick Chek.   Came along in 1967 and has about 121 stores in New Jersey and New York.  Both have “super” stores that also sell gasoline (though, of course, we don’t pump it… this is New Jersey after all).

Let’s start with the most important item; coffee.  I may be biased but Quick Chek makes the best coffee in the world.   Their “20 minute guarantee” means it is always fresh.  Never a burnt taste.  Better than Starbucks, better than Dunkin’ Donuts, and yes, better than Wawa.  I feel the Wawa coffee is a little watery.  Not a very strong taste but slightly burnt at the same time.  Quick Chek with the easy win.

Wawa beat out Quick Chek for having first had the self serve deli machines.  Makes it very easy when you want a ham sub with provolone, lettuce, tomatoes, and onions on a wheat roll.   There are many other things you can add to personalize your sandwich.  Quick Chek does have them now but the round goes to Wawa.

The Wawa logo is superior to the Quick Chek logo.  The Canada Goose looks pretty nice majestically in flight.  At least as majestic as those pain in the ass birds can be.  Quick Chek uses a leaf in the “Q”.  Uh, yes, not much to add to that.

Both have “no surcharge” ATMs so that is a push.  They both also now have shakes you can prepare yourself right on the premises.

Most Quick Cheks have a pretty good magazine section that I find is lacking at most Wawas.  When I want my copy of The Atlantic along with Car & Driver I know where to go.

The last Wawa in North Jersey was in Rutherford (or was that Carlstadt?) but closed it’s doors a few years ago.  There is a new Wawa opening in Parsippany in November  so the invasion might begin.  Quick Chek, on the other hand, has made inroads into South Jersey with stores in Beachwood and Manchester.

I believe the overall winner is Quick Chek.  It’s kick ass coffee is the knockout punch.  But now is your chance.  Who is your winner?

3 Responses to Quick Chek vs. Wawa