Normally, I’m mad at a show that wants to make fun of New Jersey. It’s been done a million times and it’s extremely inaccurate most of the time so it’s basically just lazy writing.

However, last night’s South Park episode looked more like it spoofed those terrible NJ “reality” shows in the commercial/trailers so I decided to take a look. 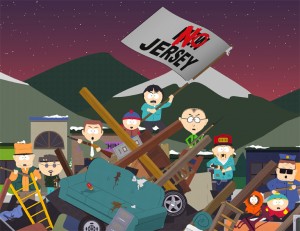 I stay away from the Jersey shows regularly but I’ve seen each one at least once (you know, for research) and I could tell I was missing a few references.  But, since we’re inundated with Snooki and the Housewives in celebrity news/gossip websites, I was able to follow most of the show.

And, honestly…  it was fun!

I wasn’t mad at them for wanting those New Jerseyans out of South Park.  I want them out of “MY” New Jersey, too!  They’ve ruined some really nice restaurants in Bergen County by making them tourist destinations and they’ve ruined Seaside Heights for anyone except d-bags so let’s get them to move to Colorado!

What did you think?    Should we transfer the Snooki monster out west?  She’s already taken over Miami.