Have you ever really looked at the Great Seal of the State of New Jersey?  It’s pretty odd looking if you don’t know what it means. 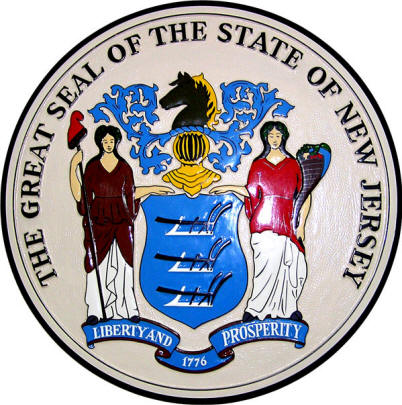 The Great Seal of the State of New Jersey

New Jersey’s state seal was designed by Pierre Eugene du Simitiere and presented in May, 1777, to the Legislature, which was then meeting in the Indian King Tavern in Haddonfield.

The three plows in the shield honor the state’s agricultural tradition. The helmet above the shield faces forward, an attitude denoting sovereignty and thus particularly fitting for one of the first governments created under the notion that the state itself is the sovereign. The crest above the helmet is a horse’s head.

The supporting female figures are Liberty and Ceres, the Roman goddess of grain, symbolizing abundance. Liberty, on the viewer’s left, carries the liberty cap on her staff. Ceres holds a cornucopia filled with harvested produce.

Although the Seal’s major elements have kept their relative positions for more than 200 years, there have been a number of lesser changes. The staff that Liberty now holds with her right hand she once held in the crook of her left arm. While the female figures now face straight ahead, they at one time looked away from the shield. The cornucopia that Ceres now holds upright was once inverted, its open end upon the ground. The Seal was redesigned in accordance with Joint Resolution 8 of the Laws of 1928. It was then that the year of statehood, 1776, first appeared in Arabic figures.

So, now you know!