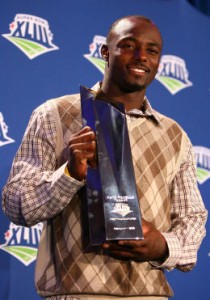 People and Jets fans, mainly everyone except Texan fans, are dubbing this game the “Game of the Week”. Once again, with seconds left in the game, the J-E-T-S find a way to win in order to seal there eighth victory of the season.  After the Jets blew a sixteen point lead late in the fourth quarter, the matured Mark Sanchez drove the ball down the field and over seventy yards with under a minute left in the fourth quarter and found Santonio Holmes in the end zone to beat the Texans by three. Even I lost my faith in the fourth quarter with these Jets, but once again they escape humiliation and get the job done.

I have to say, after not giving credit to the Jets lately and thinking they are completely overrated, the Jets did Sunday what Superbowl contenders do, and that is produce game winning drives with the clock expiring. I really didn’t believe Mark Sanchez had it in him. Rex Ryan was quoted on HBO’s “Hard Knocks” in preseason stating “Santonio Holmes is the best player the Jets have” and right now he is making catches and touchdowns when they count.

Are the Jets Superbowl contenders? How much more proof do we need? 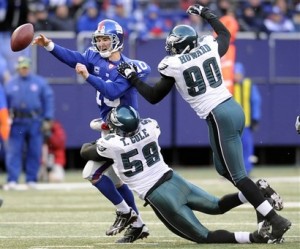 The Giants followed their game plan on defense and kept that fancy ballerina Michael Vick in check all night, but someone forgot to inform the Giants offense of the little things that win games, like not turning the ball over every time you touch it.

It was an ugly game on offense for Manning and Co. as they just turned the ball over too much and gave the Eagles more opportunities to score. Why does it seem week in and week out it is either Big Blue’s offense or their defense that can’t seem to get anything together? The last time I checked, you need to play BOTH offense and defense to win games. Coach Coughlin is a great coach, but this whole mess of giving the defense the bye week and then the next week the offense gets to take off is not working. How about next week both squads show up? Lets see if the Giants can win when both the offense plays and the defense plays.

Even thought the score was 27-17 it could of been much worse for the Giants as the Eagles had two dropped passes that would of been touchdowns. In a divisional game with first place on the line, the Giants just could not click and looked lost out their. This is not a good sign with the playoffs not to far away and tow straight divisional losses.