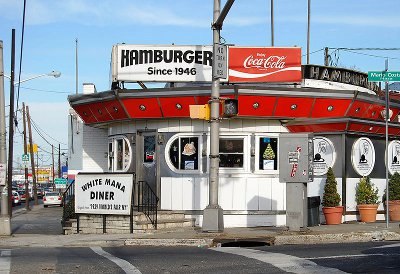 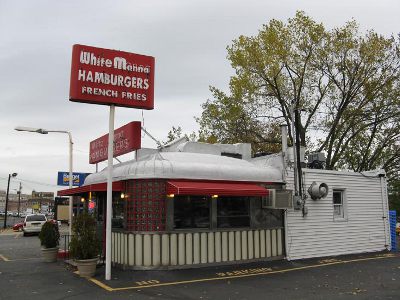 If you have been to either the White Mana in Jersey City or the White Manna in Hackensack, you may think they are restaurants of the same chain. They aren’t. Not only are they spelled differently, they are independently owned and operated. The Jersey City White Mana is the original structure from the 1939 World’s Fair. When originally introduced, it was called the “diner of the future” and an “Introduction to Fast Food.” According to the present owner, Mario Costa, Jr., the reason for the difference in spelling was a result of an error when the sign was serviced. The White Manna in Hackensack opened in 1946. According to Wikipedia, they were both owned by the same person at one time, Louis Bridges.

I have been to both of them and they both offer a unique burger experience. Tonight at 10:00 PM, one of them will be declared the champion by Iron Chef Michael Symon, who recently visited both locations, working in the kitchens and tasting the locally renowned burgers.

Here’s what the two sides had to say:

“Our location is the original,” said Mario Costa, proprietor of the White Mana in Jersey City. “We still use the original ingredients for our burgers, Wonderbread, Heinz pickles, chopped onions and beef that’s delivered fresh every day.” The original owner, Louis Bridges, was Costa’s boss. When Costa graduated from college he decided to purchase the diner and has kept it the same ever since. “The White Manna in Hackensack is nothing like the original,” Costa said. “Our diner is round, so you never have to walk more than three steps to cook and serve customers. The one in Hackensack is a square, little thing.”

Ronny Cohen, proprietor of the White Manna in Hackensack, says you have to try both burgers before you can judge whose is the best. “We use a leaner meat than the White Mana in Jersey City,” he said. “We also use a potato roll instead of a plain one, for more flavor.” The White Manna in Hackensack has been featured on the Food Network channel before. It appeared on “Diners, Drive-Ins, and Dives” in January 2008. Food Network chef Guy Fieri cooked with Cohen in his kitchen and tasted his burger. Cohen has been invited to participate in New Jersey Monthly magazine’s “Best Burger in New Jersey” competition. “I have been very fortunate,” Cohen said. “I get to appear in many competitions and get my restaurant’s name out there.” The publicity doesn’t bother Costa. “Our hamburger is the best, we have better meat,” he said. “I’ll tell you what, you watch the show and you be the judge.”

Check out Star Ledger’s article about the competition here.

Here’s what the Jersey Journal had to say.

You can’t affect the outcome of Food Feuds,  but you can vote for your favorite here. Which White Man(n)a do you like better?