Governor Christie to New York – “Stop screwing with us” 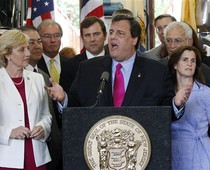 The Tappan Zee is a toll bridge and money from toll receipts has flowed into New York’s governmental coffers. But now that the bridge badly needs expensive repairs, New York would like a different arrangement.

Yesterday Governor Christie’s response to an attempt by New York Governor Paterson to include the Tappan Zee Bridge within  the Port Authority of New York and New Jersey was repeatedly quoted on news radio. Governor Christie: ‘I can’t make this any clearer to New York than this: stop screwing with us. You’re not going to come and pick our pockets. New Jersey is not going to permit it anymore.’

Stop screwing us should have been NJ’s refrain when the ARC tunnel arrangements were made. It was not and NJ was left holding the cost overrun bag. Governor Christie continues to get support from congressmen in the state for his challenge to the Federal Transit Administration. An article published yesterday notes Congressman-elect Runyan’s argument citing the inequitable financial burden distribution and his support for Christie’s endeavors to protect New Jersey. Congressman Andrews noted a fact stressed here in the past namely, that New Jersey is habitually on the short end of funding from the federal government.  In short this state sends much more to Washington than it gets back. That is one trend that stays the same whether our governor is Democratic or Republican.

It’s nice to see a politician that wants to get the budget in check and have us live within our means. As long as it is not hypocritical and the examination of wasted tax dollars extends to exorbitant salaries, double-dipping, mis-appropriation of money and all types, and all types of corruption or inefficiency. Cancelling the ARC tunnel and not allowing New York to commit highway robbery on us are steps in the right direction.

The sad part is that the states that are not cutting back or coming up with solutions to live within their means like California and Illinois may get bailouts from the Federal Government. This only promotes bad behavior and in the end is not a solution at all because a bailout that must be paid back is just creating a bigger problem for other people to deal with in the future. Other politicians in this country and all over the world need to follow Christie’s lead and realize that a balanced budget is the only way to stop corruption and wastefulness in government and the only path toward stable and successful economic growth