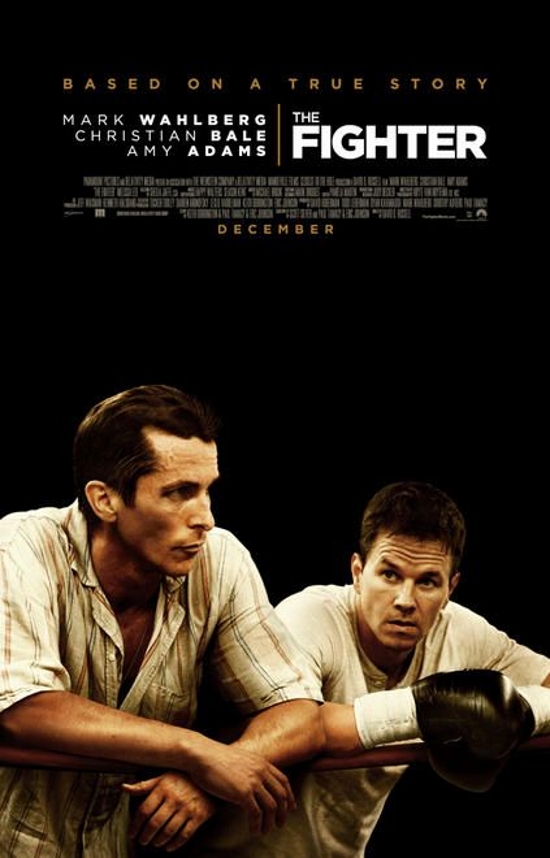 The Fighter is based on a true story about 2 boxer brothers from Lowell Massachusetts, and the paths their careers take. Christian bale’s character, Dicky Ecklund, is washed up, still trying to coast on a glimmer of fame he achieved years ago. The lead of the film, Mark Wahlberg’s Mickey Ward is Dicky’s younger brother. Mickey looks up to him as his mentor and trainer. The problem is that Dicky’s life has been derailed by drugs and he is hanging in the wrong circles now. He is more hindrance than help. Mickey’s family handles his boxing career and he is too loyal to his family to question if they are doing the best thing for him or not.

This all changes when Amy Adams’ Charlene Fleming enters his life and gets him on track to some real success with the help of a new management team. The dilemma that Mickey faces is : How can he achieve the success of his potential, while not turning his back on his family? The answer is not as cut and dry and simple as you think. Maybe if this was not a true story it would be obvious, but life is more complicated than that.

This is a gritty movie with a real sense of place and lifestyle. It has a raw and real feel to it. There is no question that Christian Bale will receive a well deserved Oscar nomination. His performance is something you have never seen from him before or many other actors for that matter.

I hate to say this, but this movie is like Rocky for a new generation. It builds to a genuinely emotional climax that had the audience that I saw the film with cheering. The main difference from Rocky is that it is true. Making a movie that is based on a true story is always a marketing ploy, but at the same time, it adds something to the movie knowing that events really did happen. There is a certain gravity to that.

This is much more than just a boxing movie. It is about family and relationships, about success and failure, and the hard choices that a person has to make to try to succeed while holding relationships together. This is one of the best movies of the year.

Pin It
Previous post:
Week 15 Giants/Jets Preview Next Post:
There is still time to enter your picture for our January Banner