Movie Review – The Next Three Days 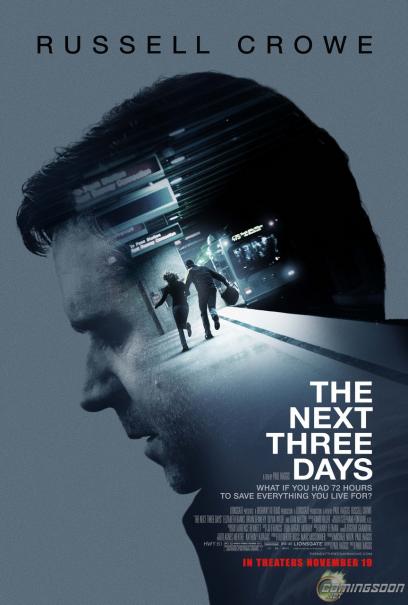 When I first saw the trailer for The Next Three Days, I thought it looked like a Hollywood action film version of Conviction, the Sam Rockwell and Hilary Swank movie about a sister putting herself thorugh lawschool to try to get her brother out of jail. In this movie, Russell Crowe attempts to break his wife out of jail after being sent there for a murder for which he believes she is innocent.

I love movies that start with a bang and this one does. not a bang of violence but of dialogue. The opening scene of 2 couples in a restaurant is well written and gets the movie off to a good start. Almost immediately after, the next morning Elizabeth Banks character is arrested for murder. It is for the most part circumstantial evidence but still pretty compelling. Of course the main thrust of the film is Russell Crowe’s attempts to break his wife out of prison starting with legal help and research and then moving on to the more extreme measures.

I felt there was a true sense of tension and mystery of – Will he or wont he be able to pull it off. Another nice touch is that the movies leaves the question of his wife’s guilt or innocence a mystery until the very end. This is slightly manipulative, but makes you question the point of everything Russell Crowe is doing to get her out of jail. Although an attentive viewer should be able to pick up on subtle hints as to the characters motives and what the truth is.
It is also nice to see a movie where most of the characters are smart and none of them are unreasonably stupid just to satisfy plot points.

This is a good movie that does not take the cut and dry easy way out that I thought it would. This movie takes it’s time dealing with the difficult decisions that must be made and how this situation can really weigh heavily on someone. Co-written and directed by Oscar winner Paul Haggis of Crash fame, this film doesn’t shy away from the serious questions that it raises and demonstrates how luck, both good and bad, can play an important role in our lives.