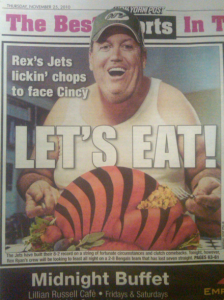 This win was a bit easier on the Jets as the Bengals could not get anything going offensively. It was not an exciting game as it was projected to be, but anytime Ochocinco and TO are on the stage, some weird voice urges me to tune in just to see if either one of those two nut jobs are going to do anything crazy. I was crying from disappointment as either one of those two clowns did anything to entertain me. Blame it on the tryptophan from all the turkey I devoured that day or that the game was just plain boring, but I only had one eye open by the fourth quarter.

No entertainment from Batman and Robin, nor was Rex Ryan providing a laugh, but either way the Jets win another game at home and are now tied with New England for a divisional match up in Foxborough Monday night! Now that will be wickedly entertaining! 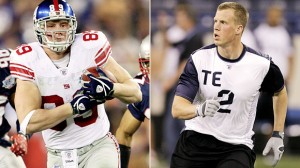 It wasn’t a pretty one, but a late Kevin Boss touchdown and great defensive stops, the G-Men eeked out a big win Sunday at home against the Jaguars. With a Eagles loss and a Giants win, the Giants are now tied for first place in the NFC East. Once Eli stopped his whining about Hakeem Nicks and Steve Smith being ruled out for the game, Justin Tuck and the rest of the Giants defense were able to work their voodoo during their half time ritual and come out in the second half on fire.