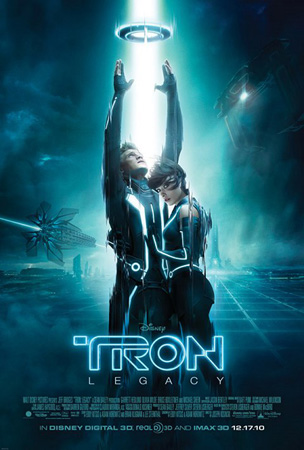 After seeing the new The new Tron movie, I walked out wondering one thing :  Where was Tron? The fact that this movie is called Tron : Legacy doesn’t really make any sense as he is barely in it. But more about that later. The storyline is a direct sequel to the first film so it is good to be familiar with it if you are going to see this one. The 28 years difference is one of the longest for mainstream theatrical sequels. The first film is known primarily for groundbreaking visuals and style, not for the weak story. However, in the first film what was happening inside the computer had a parallel  to what was happening in the real world. While Kevin Flynn (Jeff Bridges) is inside the computer in the first film, the events that are occuring are an abstract version of what the computer is being used for in reality, like a wild imagination of how the computer is getting the work done that you give it. Flynn is trying to access information and the Tron program helps him get it out. The events were connected. In the new movie, there is no such connection what so ever. Although after thinkning about it a bit, that may be a good thing. It would have probably come out as a horrible heavy handed commentary. Of course, there is a line in the trailer and commercials that says our worlds are more connected than you realize. The argument you would have to make for that idea would be very weak at best.
This film betrays it’s predecessor in many ways. Starting with the fact that there is no real world/ inner computer workings connection. Furthermore, the look is a lot more polished than the original, but also a lot less creative. In the original, the lights in the computer world characters outfits would get brighter and dimmer based on the character’s emotion or energy level. That was a really nice touch. This movie has simply forgotten about it. The original computer world was raw, gridlike and rigid, while the new computer world has nightclubs, food, books, and other real world objects that just have no place being there at all. There is a character that runs a nightclub that is ridiculous and pointless. It seems like the makers of this film have forgotten that the computer world is supposed to be an imaginative abstract of the inner workings of a computer and how programs interact and get their work done. A very distracting element is the CGI younger version of Jeff Bridges, but I can forgive it in the computer world as that doesn’t really have to look normal. Sadly, as revolutionary as the first film was in it’s style and creative visuals, this film is not. Despite being visually stunning, this movie does nothing that we didn’t know that it could do. It doesn’t make an effort to go beyond like the first one did.
Back to Tron. Tron, played by Bruce Boxleitner as in the first film, is faceless for all of about 5 seconds of his 5 minutes of screen time. Even the real world programmer of the Tron program, also played by Bruce Boxleitner is in the film only briefly. That was a big disappointment, not only because it basically marginalizes Tron as for as the storyline goes, but also because Bruce Boxleitner has so much more screen presence that some of the other actors in the movie that you want to see more of him. Anyway, on to the good aspects of the movie
The movie has stunning visuals and a great soundtrack. In fact, they are enough to recommend seeing the movie on their own. Then there is Jeff Bridges, who is every bit as good here as he is in True Grit, just in a different way. His acting is a marvel to watch and his zenlike ways and philosophies are reasonable given his characters circumstances. This movie does have some ambitious philospohical ideas that could have worked, had they been better executed or more well thought out. In the end though, you are still waiting for an explanation that you never get. This movie could have been so much more than it was. 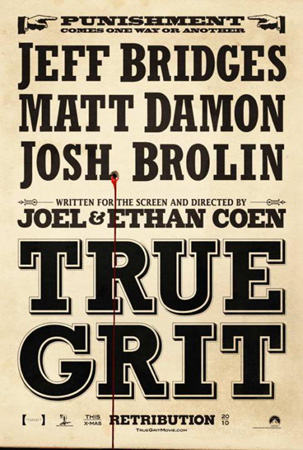 True Grit is a remake of a 1969 John Wayne western. It starts off with a premise that is very straightforward, easy to relate to and common to a lot of other Westerns : Revenge. The story is about a 14 year old girl, Mattie Ross (Hailee Steinfeld) determined to bring the man who murdered her father to justice. A couple other things are thrown into the mix but that is the just of the story. Jeff Bridges gives a weathered and weary but professional performance as Rooster Cogburn, the Marshal that the girl hires to catch Tom Chaney (Josh Brolin) . Matt Damon shows up as a Texas Ranger trying to bring in the same man for a different crime.

The Coen brothers have made a beautifully crafted movie, that is more straightforward and not as quirky as some of their other films. The cinematography is amazing with beautiful scenery and is creative with the point of view from which certain scenes are presented.  The soundtrack is very fitting and effective. The story is simple, the details are important.

What really stands out in this movie is the performance by Hailee Steinfeld. It is a surprise that she is nominated in the Supporting Actress category since she is really a lead. The advantage to this is that she can actually win this category. If she had been nominated in the Lead Actress category she would have had much stiffer competition, especially from Natalie Portman, who I feel should win Best Actress. Westerns are rare these days and it is a nice change of pace with a universal story, good acting and a pace and style that keeps your interest all the way through.

Pin It
Previous post:
State Theater NJ – STOMP Next Post:
We Know Gas in New Jersey is Expensive but…