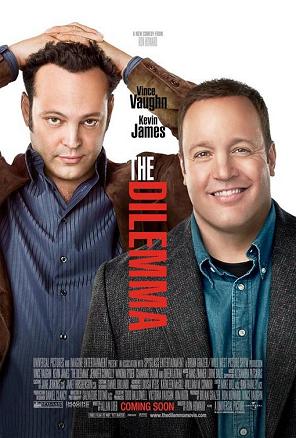 The Dilemma is a movie about a guy witnessing his best friends wife cheating on him and then trying to figure out if and when to tell him. But it gets a lot more complicated than that. Ronny Valentine (Vince Vaughn) has the dilemma and spends the film trying to juggle the increasingly complex variables of the situation, much to the confusion of his wife and everyone around him. Ronny and his best friend, Nick (Kevin James) are on the verge of making a deal with Dodge to make a cool hybrid. Being that Nick is the brains of the duo, Ronny doesn’t want to jeopardize his successful completion of the engine at this critical stage. From there things get a lot more complicated.
This is a high concept movie that can be summed up in one sentence. When you watch a movie like this, there are bases that you expect them to cover and you look for those. But what is nice is when a movie does more than cover the bases and gives you something extra. That is the feeling that I had here. This film is a comedy, but with a lot of drama driving it. The clash in tones sometimes leaves the movie feeling a little stagnant. Vince Vaughn gives a more toned down grown-up performance here while still going into his trademark riffs from time to time, most notably in a funny toast scene. But he successfully pulls off the drama which was nice to see. Winona Ryder gives a good performance as his nemesis. Even thought the set-up is like a sitcom storyline, the payoffs show more subtlety and maturity.
This movie is about flaws and mistakes that people make, the effects of keeping secrets on relationships, and  the different reasons why we do so. This is a solid and some-what thought provoking movie that only suffers when it seems confused about whether it should be a comedy or drama in tone.