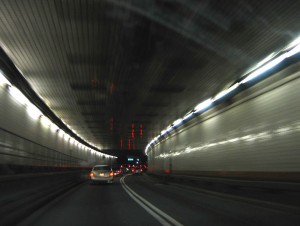 When you’re considering New Jersey’s three New York City crossings, it’s pretty easy to figure out who the Lincoln Tunnel and Washington Bridge are named after.  At least, I hope you can figure it out pretty easily!

But, who’s this Holland guy?

Well, the tunnel’s original name was the Hudson River Vehicular Tunnel when construction began in 1920.  It was finished and opened to traffic in 1927.  It was the first Hudson River crossing made for vehicular traffic and was considered quite an engineering achievement.

In tribute to the engineering that made the tunnel possible, it was renamed the Holland Tunnel after Clifford M. Holland, the Chief Engineer in charge of solving many of the engineering problems that had previously kept a tunnel like this from being built. The most important thing they figured out was how to ventilate the tunnel so that fresh air was present for gas engines to work properly and in case people needed to be inside the tunnels for emergencies or maintenance.

Unfortunately, Clifford Holland died while having a tonsillectomy in 1924 during the construction of the tunnel so he was never able to see the product of all his hard work.

But, he is one of the few people who have a bridge or tunnel named after him who actually had something to do with the construction of it!  Pretty neat.