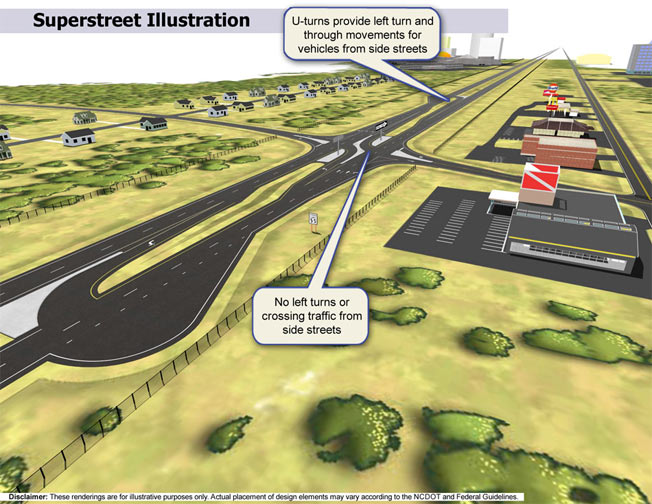 Except that we would have about 100 more stores on this road... this looks fairly familiar!

On January 10th, North Carolina State University released the results of a study by Dr. Joe Hummer, professor of civil, construction and environmental engineering, which concluded that not making left turns on surface streets saved 20 percent in overall travel time and also resulted in fewer accidents.  They recommended something they called “Superstreets” which are surface streets more like highways where U-turn lanes replace left turn lanes.

Does that sound familiar to anyone?  Yes?

Aha! It’s what we’ve been doing for years already here in New Jersey!

According to the press release by NC State, the superstreet concept has been around for a long time, but no one has thoroughly researched its effectiveness over normal street layouts and in normal traffic conditions. The NC State study is the largest analysis ever performed of the impact of superstreets in real traffic conditions.

So, once again, New Jersey leads the way into the future, one jug handle at a time.

Superstreets Save Lives And Fuel By Ditching Left Turns – The Consumerist.

Pin It
Previous post:
Things to do in Jersey – January 21 22 23 2011 Next Post:
Flemington’s Landmark Union Hotel May Live Again