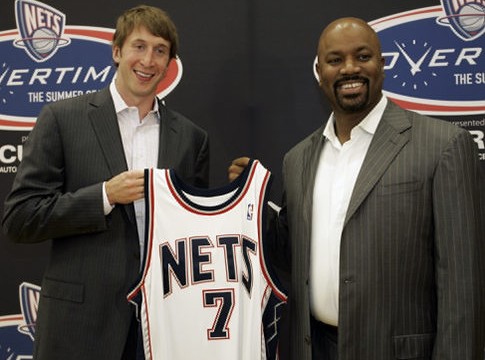 Have You Seen This Man?

Where in the world is Troy Murphy?

The high price Jersey native was the Nets biggest acquisition this past off season, but if you have been one of the few fans watching Nets games lately he is no where to be found. Has anyone wondered where Troy has gone? He was supposed to flourish for the Nets, provide a double-double every night and shoot three’s from the perimeter like Kerry Kittles. So what happened to him? Did he team up with Pauly D and Snooki and learn the Jersey fist pump?

Actually none of the above. Back in January, Coach Avery Johnson declared there were just not enough minutes available for Murphy due to the fact that rookie Derrick Favors progressed earlier then expected and Kris Humphries suddenly found a groove with rebounding and dating one of the Kardashian sisters.

Troy Murphy and the Nets came to an agreement he will be traded by the February 24th trade deadline and that he did not have to show up for practice or games until then. Not a bad deal for the Jersey Boy. So with his remaining 12 million dollar salary, the only expected move at the trade deadline is Mr. Murphy moving, with Orlando being the latest rumored destination. So who needs the Jersey native when you have a hot handed rookie and a celebrity in Humphries knocking down rebounds and Kardashian’s?