Mikhail! You are a Liar! Tell Carmelo Anthony to Take A Hike!! 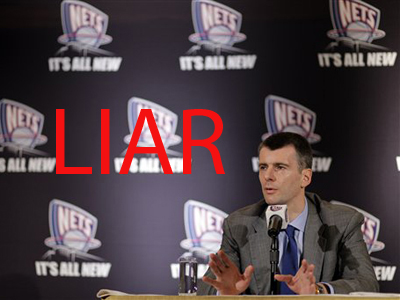 Why is this possible trade even still being talked about?  In January our sports editor Nick sent me a video of New Jersey Nyet, er Net, owner Mikhail Prokhorov talking tough and acting every bit like Ivan Drago saying things like “there comes a time when the price is simply too expensive” and “I’m telling my team to walk away”.  When he was asked if the decision to end all talks with Anthony was final his reply… “for sure”.  Maybe Ronald Reagan was right all along about not trusting the Russians!

During this weekend’s NBA All-Star festivities there was a closed-door, not so secret meeting that included among others, Prokhorov, Anthony, and Jay-Z (I got 99 problems and Melo is one).   The agenda?  Begging Anthony to play for the Nets.  Basically the new owner has lied to everyone, including us long suffering Net fans.  He’s treating us like a bear in a Moscow circus.

Couldn’t you at least have held on to your integrity for one measly season?  Maybe back up that tough talk in the previous press conference?  I guess not.  If that’s the way he is going to act, screw it.  Let the team go to Brooklyn.  I guess you don’t become a billionaire by keeping your word!

Click here to watch Prokhorov’s nose grow as he calls Melo deal dead back in January.