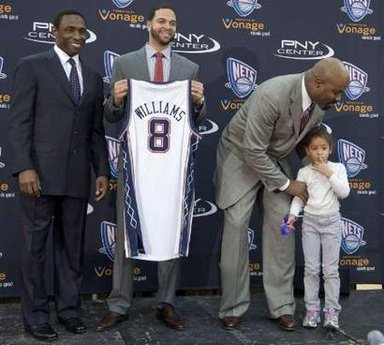 All-star point guard Deron Williams landed in the Garden State Wednesday afternoon in a blockbuster trade with the Utah Jazz that even the most experienced bloggers did not see coming. The Nets landed their franchise player by sending Devin Harris, rookie Derrick Favors, two first round picks and $3 million in cash to Utah and in return received arguably the best point guard in the NBA right now. Not bad for failing on getting Melo.

The mad Russian, after his failed attempt at LeBron James and  Carmelo Anthony, did not give up in his search for a franchise player. After the rival Knicks won the Carmelo bid, Prokorov pulled off this deal and sent shockwaves around the NBA. This is giving me flashbacks of Rocky 4 with this new war between the Knicks and Nets. Finally the war is getting to the basketball courts as the Nets got their player.

This is one of the first steps in the Russians mega plan with the Nets. Now finally we are able to attract other big name players here since we have a all-star and a franchise player to build around. The Nets still have plenty of draft picks (1st rounders), plenty of cap space to sign other big name free agents, a new arena coming (boo) and a mad Russian who will not let the Knicks run this region anymore.

The Nets are well alive again. Please remember 10 years ago when we made the NBA Finals. It all started with the Nets getting an all star point guard named Jason Kidd and building around him. It worked then, it can work now.

Pin It
Previous post:
Movie Review – Unknown Next Post:
Site Will Be Down For Scheduled Maintenance Sunday February 27th from 12 Midnight to 4 A. M.