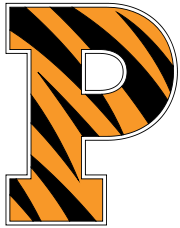 While we are still in the middle of March Madness, it is never too late to recognize the two teams who made the tournament from Jersey. Yeah I know, I thought the same thing myself. There are 64 teams in the tournament and we only get 2 teams in! Who the hell is in charge of this thing? Anyway, I’ll save that rant for another post.

Saint Peters College, located in Jersey City, made this years NCAA tournament as 14th seed from the MAAC conference. With a 20-14 regular season record, the Peacocks entered the tournament in the Southwest Region only to face Purdue, the 3rd seed, with a 26-7 regular season record, and their luck ended there. Purdue, a much more experienced team, jumped up on the Peacocks with 23 point lead and never looked back, beating the Peacocks 65-43. But heck, at least we made it there.

The Princeton Tigers, located in, well hey, Princeton, entered the tournament as the 13th seed from the Ivy League and were eliminated quickly by the 4th seed Kentucky Wildcats. Though the Tigers were knocked out of the competition early, they did put up one heck of a fight with the Wildcats and were only defeated by 2 points in a 59-57 loss. Princeton had a 24-6 regular season record and were 13-2 against other Ivy League schools.

So whether or not our Jersey squads made it past their first games, which in this case is not, it is never to late to show some recognition. You can be like “Hey, aren’t those teams from Jersey”? “When I was lost driving around Journal Square, I thought that was St. Peters College I kept seeing” or “Doesn’t Dr. House work in Princeton, the same place where that basketball team is from”? Enjoy the rest of the month of madness.