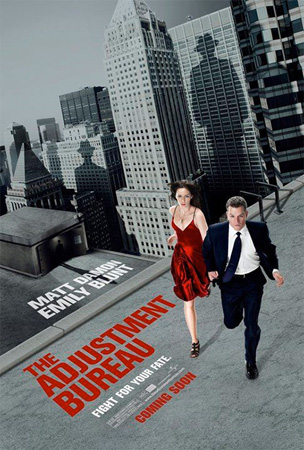 What kind of movie are you in the mood for? A romance with witty romantic comedy dialogue? How about a Twilight Zone type Science Fiction film with some philosophy and social commentary thrown in? Or maybe a Mystery Thriller? Well just go see this movie for all of the above. This movie successfully mixes these genres and more in a film that has very few peers. Vanilla Sky comes to mind but that’s about it. This is one of the best story ideas I have seen at the movies in years. It is based on a short story by Phillip K. Dick called “Adjustment Team”. Other movies based on his stories include Blade Runner and Total Recall

The Adjustment Bureau is a movie about fate and the powers that affect it. The movie stars Matt Damon as David Norris, an ambitious politician & Emily Blunt as Elise Sellas, a girl he meets on and off and finds himself irresistibly drawn to. The commercials don’t really do this movie justice. There is an amazing romance at the heart of the film that I did not expect, and better dialogue than most romantic comedies. The effortless chemistry between Damon and Blunt is essential to making the story work. You really feel that these people are meant to be together. On top of the romance, this is a very intellectual story, well thought out with a social commentary that is smart and not heavy handed. In addition, the story is great at presenting characters with dilemmas that are heart breaking and really draw you emotionally into the movie.

Anthony Mackie and John Slattery give solid supporting performances as agents of fate and Terence Stamp shows up as a higher level agent that sheds a lot more light on what has been going on. The special effects are excellent and help the story work rather than distract from it. This is an amazing achievement from first time director, George Nolfi. The movie’s only flaw is that it could have gone a ittle bit deeper into the subject matter and played it a little less safe and more daring toward the end.

Pin It
Previous post:
Birders Are in Heaven in Washington Township Next Post:
Don’t Call It A Comeback!