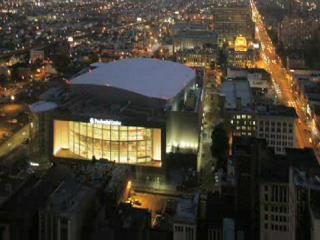 Too bad all the publicly available tickets have been sold out since April 2010, because we’d love to go see some March Madness games in The Rock! There are still tickets available that the NCAA organization holds to use as they please.   There are even more tickets in a block that each school in the individual games get. There are 18,000 seats total available for each game but the only way you’re getting in now is to quickly enroll in one of the colleges playing or sell your car and hit the scalpers.

The Rock will host the East Regional  Sweet Sixteen and Elite Eight rounds on March 25th and 27th before the Final Four are decided and they go play in Houston.  Princeton might even even get to play in their home state!

In June 2009, Prudential Center and Seton Hall University put together and submitted their bid for getting games to comes to Newark.  By September, 2009, they knew they’d won the slot.

It’s tough to get picked as a new venue for the games since there are so many places that have already proved themselves as good hosts to players and students from all over the country. IZOD Center in the Meadowlands is a perennial NCAA host so Newark had to fight against others in their own state to get the bid, too.  So even if you mess up your bracket early at least you have a small shot at attending a game, watching the teams you didn’t pick!

Read more about it on NJ.com here:  Eyes are on Newark, as city hosts March Madness NCAA tournament | NJ.com.