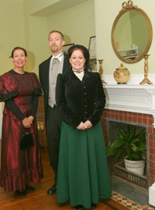 (Friday, Saturday, Sunday)
March 18-20 and November 4-6, 2011…. be sure to reserve early!
The game’s afoot in Victorian Cape May… Choose your weekend for a suspense-filled encounter with that inimitable detective Sherlock Holmes in the National Historic Landmark City of Cape May, New Jersey.

Solve the mystery of Sherlock Holmes and the Case of The Surreptitious Ghoul!

Join Homes and Watson as they explore the Gothic Habitants of Underground London Society, or G.H.O.U.L.S. for short. Mystics, mediums, murder and mayhem abound in this bleak world. Our duo will need your help as they peer deep into the darkness and face the fears that lie within. As the Raven states, “Nevermore,” will Holmes reply, “The games afoot?” Join Holmes and Watson for another “edge of the seat” thriller.

Get into the spirit of things by donning Victorian attire. Stalk the gaslit streets in search of clues and compete for the $250 grand prize and a variety of other valuable gifts as you attempt to solve the mystery. Enjoy a Spring or Fall getaway and a new mystery, written especially for 2011.

Starting at the Prudential Center “The Rock”