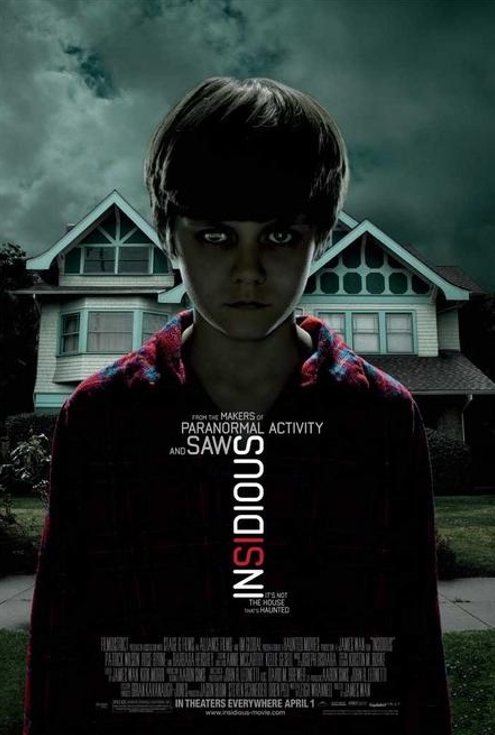 I went into Insidiuos knowing nothing about the plot, except that it was about a family and some element of it focused on their son. He is the subject of the movie poster. Josh and Renai Lambert, played by Patrick Wilson and Rose Byrne move their family into a new house. The movie does a good job of introducing the characters and situation and leading into the event that creates conflict in the movie. Their oldest child is afflicted with a mysterious malady and the story takes off from there. It is more than halfway through the film that the audience is let in on what is happening and what the subject matter is. Upon finding out, I realized that I have never seen any movie before take on this topic. But is it good?

After getting home from the movie I did some research and discovered that there really have been very few if any movies on this topic. At the Internet Movie Database, the closest keyword search only returns 22 matches and none of them utilize this aspect of the idea. Some people may say it is like Poltergeist, but that is very loosely true. This is a smarter than average horror movie, and it is paced and filmed in an adult manner. What this movie lacks in excitement, it more than makes up for in extreme creepiness. This is not to say that the movie doesn’t have some serious scares. The audience I saw the movie with had a few GASP! moments where they were taken aback. The latter part of the film brings in additional characters to help deal with what is going on. The film has a good sense of humor from the beginning, and it gets even better with it’s version of Ghost Hunters. I liked the plot and how it unfolds and the secrets that we discover about the characters. This movie is a good solid horror movie.

The Director, James Wan started the Saw series along with writer Leigh Whannell. Since then, Wan and Whannell have been producers of the Saw franchise, but have gone on creatively to make Dead Silence and now this film. They could have just gone on with the Saw movies, but they wanted to try out some new ideas. Dead Silence didn’t have the impact that Saw did and I am not sure this will either, but it is really nice to see these filmmakers continue to explore new ideas that are unique and original, and not just coasting on their successful Saw franchise.

Pin It
Previous post:
Death Comes to the Penny Meter in Somerville Next Post:
Head Over to Carlstadt Tonight for Winning and Trolls