The first week of 2011 is in the books and our Jersey area teams all fared well. Rain, cold weather and massive home runs played a factor in all games, but hey, none of the three teams below are 1-6 like our beloved friends in Boston. 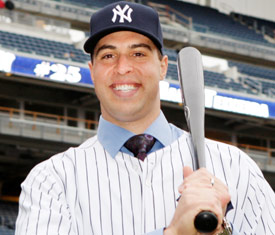 The Yanks opened up the season by winning both series at home and belting 13 home runs.  Detroit came into the Bronx to open up the stadium and the Yanks slaughtered their way to victories during the first two games. In the third game of the series the Yanks and Tigers both put on a home run derby with Detroit coming out on top. I wonder if slugger Miguel Cabrera of the Tigers (known for his alcohol problem) was hanging out at Stan’s Bar before Sunday’s game as he belted two monstrous home runs. Stan’s whiskey sours are known to do that to the occasional alcoholic.

On Monday, the Minnesota Twins came into the Bronx for a four game series, which due to the beautiful weather we have been having since ummm last October, was rained out one game and turned into a three game series. The Yanks took two out of the three games and were real close to a sweep by having a four run lead going into the 8th inning during the second game, but the bullpen could not hold the lead and blew the game in devastating fashion. Raphael Soriano, who blew the lead, would not talk to reporters after the game, something he has since apologized for. I mean if you just blew a game for your team, would you want to talk to the media? 🙂

Ahhh the Amazing Mets. After losing game one of the opening series against Florida, fans and analysts were already writing them off and predicting a last place finish in the division. Folks, this is after game one of a one hundred and sixty two game season. The Amazings answered the critics right back and won the next two games to secure their first winning series on the road, something they did not do until August of last season! Yes you can do the math, I did say August and the season started in April.

After the winning series in Florida, the Mets flew up I-95 to land in Philly to face the ummm, Phillies! This series did not end as good as the Florida one did, but the Mets did manage to win a game. Game one they blew the Phillies away and ummm games two and three the Mets were uh blown away themselves. The good news is there were no injuries and Jose Reyes is playing great to open up the season. That is definitely looking at the glass half full. The hottest of the three Jersey teams, the Phillies opened up at home with a three game sweep of the Houston Astro’s and then slugged themselves to a three game series win against the NY Mets. Even with the injury to Chase Utley and the loss of Jayson Werth, the Phillies are still the Fightin’ Phils, clawing their way to victories no matter how many runs they are down. Currently the Phils are second in batting average and second in on base percentage in the league.

Pin It
Previous post:
Head Over to Carlstadt Tonight for Winning and Trolls Next Post:
Signs of New Jersey – Gilberto’s Cafeteria