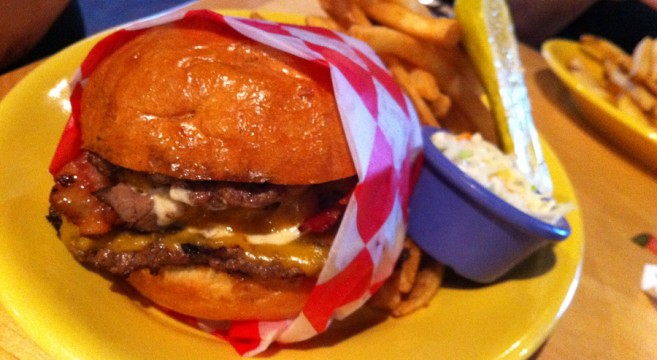 May is Burger Month and we asked for suggestions of New Jersey’s best burger places that we haven’t reviewed yet. We asked and you delivered.

Several suggestions came in for BlitzBurgers in New Brunswick and North Brunswick so we headed down there last week. North Brunswick was a little easier to get to so that’s the location we chose. 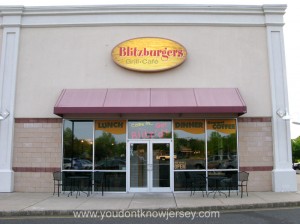 BlitzBurgers’ North Brunswick location has an unusually extensive menu for a restaurant with Burgers in the name. Paninis, soups, salads, hot and cold sandwiches, wraps, chicken burgers and hot dogs all made the menu. The New Brunswick location has a few less items on the menu, but there are still many options for non-burger people.

Most importantly, the burger menu was extensive.  There are 30 composed burgers and you can also Build Your Own into any of 781,649,452 combinations. 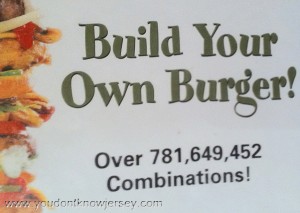 We loved their light-heartedness immediately.

First, we got a free appetizer of fried pita wedges and bruschetta.  It was very good but I would have liked the bruschetta chopped up a little smaller. A minor inconvenience.

The burger I chose was the Bistro Burger.  I got it “Blitz’d” which means that you get two 1/3 pound patties instead of one and all the toppings are stuffed between the two burgers. The Bistro’s stuffed toppings were bacon, caramelized onions and brie.  The bun is a brioche-type bread and worked very well in keeping all the juiciness of the burgers and toppings inside the sandwich.  I was very surprised how well the brie held up against the bacon and burgers. It added a really nice creamy and nutty flavor to the whole package. As a side, I chose the kettle chips instead of the fries and they were delicious. Not too greasy and very lightly salted.  I ended up adding some malt vinegar and extra salt for more punch. The coleslaw that came with the combo was also very good and tasted freshly made. 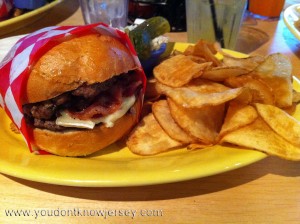 Our party also tried the Blitz’d Beefster Burger.  Two burgers with roast beef, bacon, swiss and horseradish-mayo spread.  We tried ours with cheddar as a substitute. One comment about the Beefster (two people ordered it at our table) was that the roast beef would have been better if it had been added after cooking the burgers.  Apparently, the meat all cooked together and lost something in the grilling. 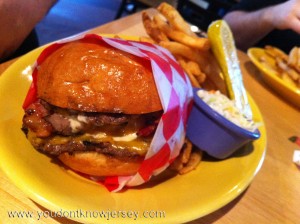 We also tried the Bacon, Bacon burger which had LOTS of bacon on it along with cheddar cheese.  The other diners all got fries and thought they were good but nothing special. 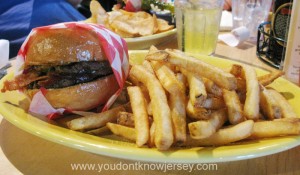 All in all, we thought the burgers had a very nice char-broiled taste and the toppings were nicely chosen in the composed burgers.  In the end, though, we all just had a fine meal. Nothing really excited us. 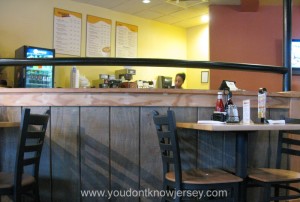 Maybe the restaurant itself had something to do in killing our vibe.  It seemed like it used to be several different kinds of restaurants and the new owners didn’t really change it up enough.  The outside looked like a modern burger joint.  But, inside the front door, it felt like we were in a sushi restaurant with a silk screen and lots of potted plants.  Getting past the sushi area, we came across a large counter that looked like the place where we might order.  Then we noticed a sign telling us to wait to be seated.  So, now we were really confused.  It’s a sit down restaurant?  Once we ate, a few of us used the restrooms before leaving and we came across the last restaurant type.  The restroom area looked like it was out of a Mexican restaurant. The seating area itself was very modern and clean.

Nice job, readers.  Where should we go next??