Movie Review – Everything Must Go 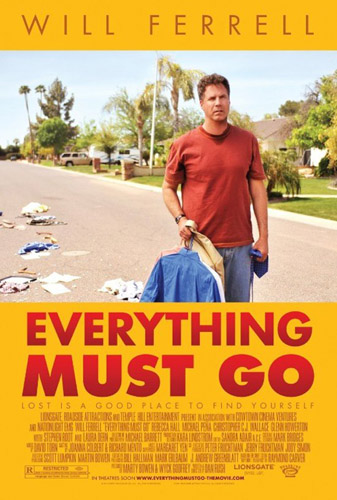 Everything Must Go stars Will Ferrell as Nick Halsey, a struggling alcoholic who loses his job and is locked out of his house and has all of his belongings thrown on the front lawn by his wife. He decides to simply live outside with his stuff. Good thing it’s Arizona where it barely ever rains. He hires Kenny (Christopher Jordan Wallace), a boy who rides his bike all day and has nothing to do, first to make sure no one takes anything and then to help him sell everything when he turns it into a yard sale to deal with legal ramifications. Rebecca Hall plays Samantha, a pregnant wife who just moved into the house across the street awaiting her husbands arrival. And Michael Pena is Frank Garcia, his Alcoholic sponsor and a Police Officer.

The plot is based on a short story by Raymond Carver, “Why Don’t You Dance”. The Screenplay, by the Director Dan Rush, adds a lot of it’s own material. Things progress pretty much the way you would imagine for someone living in front of their house. Without a job, Nick can drink whenever he wants, has to improvise his daily routine such as bathroom, shower, eating, sleeping and so forth. He also gains some new insights into some of his neighbors. Even though the movie has some light moments and humor, this is a drama and Will Ferrell handles it very well. The danger of being a movie star that is well known for a certain personality and style is that the audience expects that out of you. Will Ferrell sucessfully discards his movie star persona, but remains an interesting and entertaining personality. He has done drama before, but it is still amazing how comfortable, believable and genuine he is in this dramatic role.

Another strength of this film are the relationships Nick builds with the other characters. He is picking up the pieces of his old life and building new relationships along the way. The movie moves at a slow but consistent pace and reveals a secret held by one of the characters. The cinematography is very well done and it is a beautiful movie to look at. This movie is not for everyone, as some people may find the laid back and relaxed pace boring. But that is the right pace and tone for this really interesting film about a man trying to figure out how to move on from a shattered life.