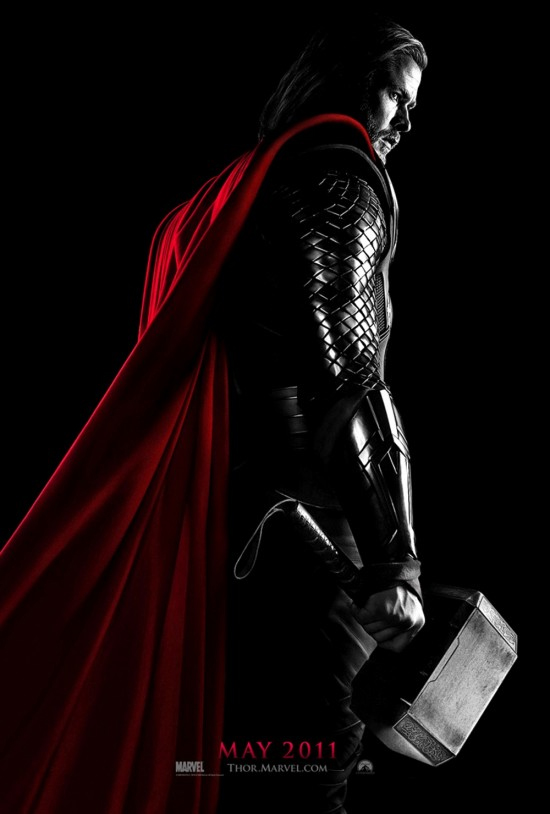 The Marvel Comics character based on Norse Mythology finally comes to the big screen. Taken from a storyline in the comic, Thor (Chris Hemsworth) is banished from Asgard to Earth by Odin (Anthony Hopkins) as punishment for arrogant and reckless behavior. So how does this movie stack up against other recent Superhero movies?

Based on his previous works, Kenneth Branagh seems to be the right director for this type of material. The relationship between Thor, Odin and Loki is like a Shakespearean tragedy. The main plot of the film involves characters from and takes place on Asgard. I cant say for sure, but I think this movie is set at least half in Asgard, the world of the gods. The villain of the movie, Loki (Tom Hiddleston) is scheming and manipulative. The heart of the story revolves around Thor and his family, and the secrets that will come out as the story unfolds.

The segment of the story that takes place on Earth is simply a detour until the real story can resume again. Upon arrival on Earth, Thor meets a team of Astrophysicists, including Jane Foster (Natalie Portman). Jane is a perfect woman in every way, beautiful, smart, polite, strong-willed and… kind of boring. She has no flaws or personality to speak of. There is no characterization, no chemistry between her and Thor and no development of their relationship in any way. She basically treats him like a mother treats a child who has no manners. They barely talk much at all, but somehow Thor falls for her and vice versa. Going in I was really expecting a better romance and chemistry between them or at least some good dialogue that actually developed a real relationship between them. I know this is a superhero action movie, and it doesn’t have much time to spend on it, but the recent film, The Adjustment Bureau was a science fiction action movie, but in a few short scenes with some good dialogue and chemistry between the actors develops a real believable relationship. They easily had time for that here, instead they spend time on repetitive fish-out-of-water jokes that at times seem forced. This really doesn’t hurt the story that badly since the real story is about Asgard and the Gods. What happens on Earth is a less important sub-plot.

The movie has it’s moments though and there is one genuinely stirring scene that has some real emotional gravity to it. That scene as well as some others are also supported by a majestic soundtrack by Patrick Doyle. The strengths of the film are the story of the Gods, the special effects, and a couple of well-executed battle scenes. Chris Hemsworth does a good job with the role, given the character’s slightly inconsistent behavior. And it is a bold move to set so much of a movie in a foreign world that makes the movie harder for audiences to relate to. Few movies even attempt to accomplish this.