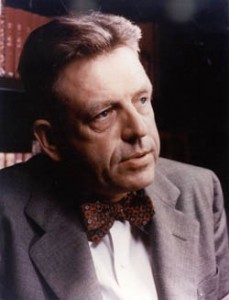 Alfred Kinsey was born in Hoboken in 1894. He was born to Alfred Seguine Kinsey and Sarah Ann Charles and was the eldest of three children. His mother had received little formal education; his father was a professor at Stevens Institute of Technology.

Kinsey’s parents were poor for most of his childhood, and the family often could not afford proper medical care. This may have led to a young Kinsey receiving inadequate treatment for a variety of diseases including rickets, rheumatic fever, and typhoid fever. This health record indicates that Kinsey received suboptimal exposure to sunlight (the cause of rickets in those days before milk and other foods were fortified with vitamin D) and lived in unsanitary conditions for at least part of his childhood. Rickets led to a curvature of the spine, which resulted in a slight stoop that prevented Kinsey from being drafted in 1917 for World War I.

Kinsey’s parents were extremely devout Christians; this left a powerful imprint on the man for the rest of his life. His father was known as one of the most devout members of the local Methodist church and as a result most of Kinsey’s social interactions were with other members of the church, often merely as a silent observer while his parents discussed religion with similarly devout adults. Kinsey’s father imposed strict rules on the household including mandating Sunday as a day of prayer (and little else).

At a young age, Kinsey showed great interest in nature and camping. He worked and camped with the local YMCA often throughout his early years. He enjoyed these activities to such an extent that he intended to work professionally for the YMCA after his education was completed. Even Kinsey’s senior undergraduate thesis for psychology, a dissertation on the group dynamics of young boys, echoed this interest. He joined the Boy Scouts when a troop was formed in his community. His parents strongly supported this (and joined as well) because the Boy Scouts was an organization heavily grounded on the principles of Christianity. Kinsey worked his way up through the Scouting ranks to earn Eagle Scout in 1913, making him one of the earliest Eagle Scouts. Despite earlier disease having weakened his heart, Kinsey followed an intense sequence of difficult hikes and camping expeditions throughout his early life.

In high school, Kinsey was a quiet but hard-working student. While attending Columbia High School, he was not interested in sports, but devoted his energy to academic work and the piano. At one time, Kinsey had hoped to become a concert pianist, but decided to concentrate on his scientific pursuits instead. Kinsey’s ability early on to spend immense amounts of time deeply focused on study was a trait that would serve him well in college and during his professional career. He seemed not to have formed strong social relationships during high school, but earned respect for his academic ability. While there, Kinsey became interested in biology, botany and zoology. Kinsey was later to claim that his high school biology teacher, Natalie Roeth, was the most important influence on his decision to become a scientist. Kinsey approached his father with plans to study botany at college. His father demanded that he study engineering at Stevens Institute of Technology in Hoboken. Kinsey was unhappy at Stevens, and later remarked that his time there was one of the most wasteful periods of his life.

Regardless, he continued his obsessive commitment to studying. At Stevens, he primarily took courses related to English and engineering, but was unable to satisfy his interest in biology. At the end of two years at Stevens, Kinsey gathered the courage to confront his father about his interest in biology and his intent to continue studying at Bowdoin College in Maine. His father vehemently opposed this, but finally relented. This decision essentially destroyed his relationship with his father and deeply troubled him for years to come.

In the fall of 1914, Kinsey entered Bowdoin College, where he became familiar with insect research under Manton Copeland, and was admitted to the Zeta Psi fraternity, in whose house he lived for much of his time at college. Two years later in 1916, Kinsey was elected to Phi Beta Kappa and graduated magna cum laude with degrees in biology and psychology. He continued his graduate studies at Harvard University’s Bussey Institute, which had one of the most highly regarded biology programs in the United States. It was there that Kinsey studied applied biology under William Morton Wheeler, a scientist who made outstanding contributions to entomology. Under Wheeler, Kinsey worked almost completely autonomously, which suited both men quite well.

Kinsey chose to do his doctoral thesis on gall wasps, and began collecting samples of the species with zeal. He traveled widely and took 26 detailed measurements on hundreds of thousands of gall wasps, and his methodology was itself an important contribution to entomology as a science. Kinsey was granted a Sc.D. degree in 1919 by Harvard University, and published several papers in 1920 under the auspices of the American Museum of Natural History in New York, introducing the gall wasp to the scientific community and laying out its phylogeny. Of the more than 18 million insects in the museum’s collection, some 5 million are gall wasps collected by Kinsey.

After his life in New Jersey, Kinsey grew to be widely known as the Father of Sexology through his famous studies and measurements of sexuality at Indiana University.