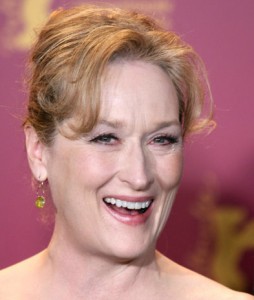 Meryl Streep was born in Summit in 1949. Streep was born Mary Louise Streep, the daughter of Mary Wolf (née Wilkinson), a commercial artist and former art editor, and Harry William Streep, Jr., a pharmaceutical executive. She has two brothers, Dana and Harry.

She was raised a Presbyterian, and grew up in Bernardsville, New Jersey, where she attended Bernards High School. She received her B.A., in Drama at Vassar College in 1971 (where she briefly received instruction from actress Jean Arthur), but also enrolled as an exchange student at Dartmouth College for a quarter before it became coeducational. She subsequently earned an M.F.A. from Yale School of Drama. While at Yale, she played a variety of roles onstage, from the glamorous Helena in A Midsummer Night’s Dream to an eighty-year old woman in a wheelchair in a comedy written by then-unknown playwrights Christopher Durang and Albert Innaurato. “It was immediately apparent,” said then-dean Robert Brustein, “that she was destined for greatness.”

Pin It
Previous post:
Things to do in Jersey – June 24 25 26 2011 Next Post:
Summit’s FlyontheWall.com Beating Wall Street to the Punch