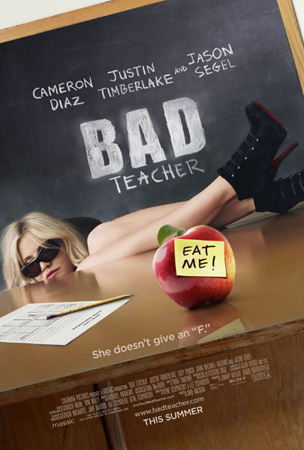 Cameron Diaz stars as Elizabeth Halsey, a ruthless gold digger and lazy but clever con-artist. She coasts through her job as a teacher with the hopes that marrying rich will set her for life. This plan falls apart however when her would be husband realizes what she is doing. She has to then go back to her teaching job, with an even worse attitude than before and with her only goal being to seduce a new rich guy and get him to marry her. So how far will she go to accomplish her goal?

Her master plan is to get a boob job that she will lie, cheat and steal to get the money for. as she feels that will be her primary weapon to land her new man. She repeatedly turns down the advances of Russel Gettis (Jason Segel), a gym teacher at the school that she regards as a loser. But when Scott Delacorte (Justin Timberlake) arrives, and she discovers that he comes from money, she finds her new target. We also get some good supporting performances from Phyllis Smith as another Teacher and John Michael Higgins as the Principal.

The movie is clever and has fun with the way she manipulates people and is constantly scheming to get what she wants. She is a fun villain to watch, and nothing is off limits to her pure driving ambition. Amy Squirrel (Lucy Punch) becomes her arch-enemy after trying to befriend her but then figuring out what Elizabeth is really up to. Elizabeth has to work extra hard as Amy presents her with obstacles on a few levels. Of course everything Elizabeth does has alterior motives including when she actually tries to teach the kids something. She only has one partly redeeming quality that I will let you figure out as it drops hints as to where the movie is going.

I found the movie to be funny and entertaining and Diaz gives a great performance of a character who is shameless. The real problem with the movie is the ending, which thankfully does not get resolved in the expected or cliched way, but instead has you feeling conflicted emotions that the movie can’t resolve. The movie wants you to feel one way, but you have a nagging feeling that it doesn’t deserve it.  Let’s just say that I feel the ending should have had more of a sinister feel to it, to better fit the tone of certain plot developments. Overall, the movie is a decent comedy that is fun to watch, but the resolution leaves something to be desired.