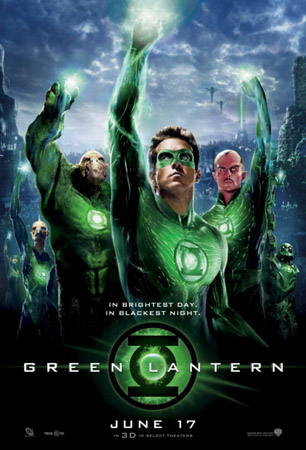 Green Lantern stars Ryan Reynolds stars as Hal Jordan, a pilot that inherits a ring from an alien policeman. He learns how to use the ring’s special powers and eventually accepts the responsibilty of taking the alien’s place. Part of the movie takes place on the planet OA where all of the Ring Wearers meet and the Guardians decide on policies and courses of action.  Green Lantern is not as well known as some of the other SuperHeros that have been appearing in movies recently. As a result, the movie has a lot of background explaining to do so that the audience understands what is going on, but I followed it pretty easily. And the story of what happens in the movie is easy to follow as well. So can a second tier Superhero make a big splash in the Comic Book movie arena like Iron Man did three years ago?

This movie has a very straightforward attitude, bordering on corny at times, but that is okay as it works and the movie doesn’t feel like it is trying to imitate other genre movies of late. The  acting was convincing from Ryan Reynolds, who was less goofy than I expected. He plays the role and the responsibility his character has to take on seriously. Blake Lively is okay and has a lot more to do here than Natalie Portman in Thor. And Tim Robbins and escpecially Peter Sarsgaard are very good in supporting roles.

The film is on the level of the Fantastic Four movies and Thor. It has the same light tone and fantasy and science fiction elements. The concept between the Green and Yellow energies and power is actually quite interesting and lends some style and intelligence to the story.  This movie was not shot in 3D, but it was shot with 3D in mind and it looks great. Definitely pay the extra money to see this film in 3D. Pirates of the Caribbean was actually shot in 3D but didn’t look nearly as good as this movie.

My biggest complaint with the movie is that the filmmakers could have done more with this idea. They laid the basic groundwork introducing the characters, an origin, some battles and a climactic showdown. They also set it up for a sequel with a scene during the end credits. As it is, this is a perfectly fine but light movie.

You can see more of my reviews at : http://www.youdontknowjersey.com/category/moviereviews/