Movie Review – Pirates of the Caribbean : On Stranger Tides 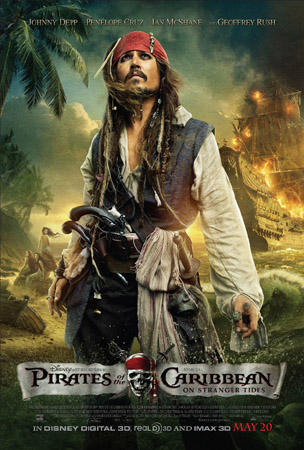 Pirates of the Caribbean : On Stranger Tides is the fourth installment of the Pirates franchise, the first since 2007. Orlando Bloom and Keira Knightly have left the franchise, leaving Jack Sparrow as the lead. Geoffrey Rush returns as Barbossa and Kevin McNally as Gibbs in supporting roles. This changes the tone of the film as Jack Sparrow can’t be as much as a selfish jokester as he has to drive the story now. He runs into an old flame Angelica (Penelope Cruz) who is impersonating him to get a crew together to help Blackbeard, played by the always great Ian McShane. Depp and McShane pretty much have to carry the movie, but is that enough?

I noticed that one of the keys to Johnny Depp’s performance is too not overdo it. He has to keep a certain relatability so the audience doesn’t feel lost following him more so now than in the previous movies. Ian McShane effortlessly controls the screen as Blackbeard, the Villain of the film, who is looking for the magical Fountain of Youth. Jack Sparrow apparently knows where it is and Blackbeard wants his help to find it. Angelica, as the backstory tells it is the closest thing that Jack Sparrow has ever had to a real relationship and possible wife. Upon their re-union, he learns that she may or may not be the daughter of Blackbeard. Penelope Cruz is just fine for theis role personality wise, she talks smart and tough and has an attitude, but it seems like whenever the action heats up she gets a get out of jail free card either through luck or Jack saving her or whatever reason, she never gets near any of the danger with a 10 foot pole. Keira Knightly, despite looking very elegant, was smart and really mixed it up as far as the action and dangerous situations were concerned. She had a fire in her eyes and stood toe to toe with villains and wasn’t afraid of getting her hands dirty no matter what the situation. So it was very distracting to me that Angelica is so uninvolved in the action. I read somewhere that Penelope Cruz was pregnant during the filming, so I understand that is probably the reason they didn’t want her to do anything physical, but then maybe someone else should have played the role.

Overall the movie is decent. Everyone can relate to the quest for finding the Fountain of Youth, so it is a good centerpiece and driving force for the characters actions. You will find yourself wondering what will happen if and when they find it. More confusing is some of the behavior of some of the characters such as the Spaniards, who are on a quest to find it as well, the behavior inconsistencies between Sparrow and Barbossa from the beginning of the film to the latter parts,  the mermaids actions given their abilities and powers, and what Blackbeard lets Sparrow do at certain turns in the story. Those are mostly minor problems though and this is an easy movie to watch and enjoy. It was shot in 3D so it looks good, but doesn’t do much for the story, and it is always annoying when they do the shot of a character pointing something toward your face, in this case a sword, just to let you know they did it on purpose just because it is 3D. That drives me crazy. This movie is set up to be the first of a new series of sequels, which it can probably pull off. It did leave me wanting to see more movies from this franchise. As an aside, stay until after the credits roll as there is a scene at the end of them.

See my other movie reviews at :  http://www.youdontknowjersey.com/category/moviereviews/

Pin It
Previous post:
Good Food and Great Cars – Our Idea of an Awesome Weekend! Next Post:
Voice Of The Bleachers

One Response to Movie Review – Pirates of the Caribbean : On Stranger Tides