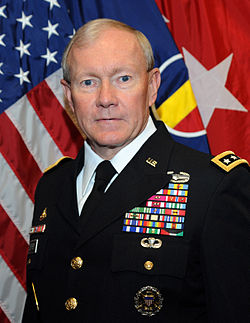 The man chosen to lead the U.S. military as chairman of the Joint Chiefs of Staff during the difficult years ahead is Martin Dempsey, a self-described Irish Catholic kid from Bayonne, N.J.

He is a battle-hardened commander seen by his colleagues as an inspired choice to guide the military through a painful period of deep budget cuts and manpower reductions. If he is confirmed as expected by the Senate, Dempsey’s job will be to help forge a new strategy to direct the Pentagon’s organization, investments, training and deployments for contingencies as disparate as managing a no-fly zone over Libya, a naval confrontation in the South China Sea, a failing government in nuclear-armed Pakistan and hostilities from North Korea and Iran.

Dempsey, a 1974 West Point graduate, led the First Armored Division through 14 months of bloody combat in 2003-2004 in Iraq, a campaign that culminated with extended urban warfare that sapped the resistance of Moqtada al-Sadr’s Shiite militia. Dempsey’s division suffered 130 soldiers killed in battle and 798 wounded. He went back to Iraq for another two years to supervise the training and equipping of the Iraqi army, and then spent a year at U.S. Central Command, the military’s Middle East headquarters. Dempsey had previously spent two years in Saudi Arabia training the Saudi national guard. He took over as the U.S. Army’s top officer in April.