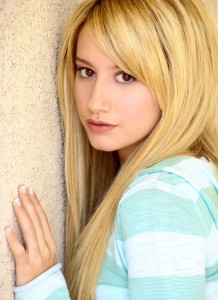 If you have kids or you watch a lot of TV, you know who Ashley Tisdale is.

Tisdale was born in West Deal to Lisa and Mike Tisdale, the manager of a construction company. Her elder sister, Jennifer Tisdale, is an actress, and her maternal grandfather, Arnold Morris, developed the Ginsu Knives. Through her grandfather, Tisdale is related to businessman Ron Popeil. She grew up in Ocean Township. She is Jewish on her mother’s side and was raised with “a little bit of both” of her parents’ religions. At the age of three, Tisdale met her current manager, Bill Perlman, at a New Jersey mall. He sent her to numerous auditions for commercials, resulting in her placement in more than 100 national network TV ads as a kid. She began her theatrical career by appearing in Gypsy: A Musical Fable and The Sound of Music at Monmouth County’s Jewish Community Center.

At the age of eight, she was cast to play the part of Cosette in a national touring production of the musical Les Misérables. She claims to have had only a single singing lesson before landing the role. Tisdale toured for two years on Les Misérables before landing a role in an international touring production of Annie in Korea. At the age of twelve, Tisdale sang at the White House for President Bill Clinton.

In the late 1990s and early 2000s, Tisdale had minor roles in several television shows such as The Hughleys, Smart Guy, 7th Heaven, Boston Public and Bette and in the feature films A Bug’s Life and Donnie Darko. During this time, she simultaneously worked as a Ford Model. For her role in Boston Public, she received a 2000 Young Artist Award nomination for “Best Guest Performance In a TV drama”.

In 2004, she was cast as the teenage candy-counter girl Maddie Fitzpatrick in the Disney Channel series The Suite Life of Zack & Cody, which premiered in March 2005 and ended in 2008. She later won her first award at the UK Nickelodeon Kids’ Choice Awards for “Best TV Actress,” thanks to her performance as Fitzpatrick.

Although the producers of the Disney Channel Original Movie High School Musical did not initially consider her because of her “good-girl image” on The Suite Life, Tisdale was eventually cast as the popular, narcissistic high school student Sharpay Evans in the 2006 film. High School Musical became Disney Channel’s most watched movie that year, with 7.7 million viewers in its US premiere broadcast. The soundtrack, in which Tisdale lent her vocals for several songs, became the top-selling album in the United States that year. Tisdale became the first female artist to debut with two songs simultaneously on the Billboard Hot 100 chart with “What I’ve Been Looking For” and “Bop to the Top”, both tracks from the film’s soundtrack. Due to the popularity earned by Tisdale through her performance in High School Musical, Warner Bros. Records signed her for a recording contract in July 2006 and she started working on her debut album.

Pin It
Previous post:
July 3-9 is Official Be Nice to New Jersey Week. No Thanks!! Next Post:
Guess Where?