Movies Set In Jersey is a new segment about, you guessed it, movies that claim to take place in the Garden State. One such movie is Paul Blart: Mall Cop. 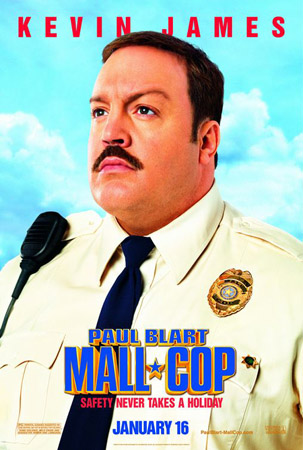 Was the movie shot in New Jersey? : No. This film takes place mostly at a mall supposedly located in West Orange, NJ. Of course, there is no mall in West Orange. I guess the closest one would be Livingston Mall. The actual Malls used were Burlington and Northshore, both located in Massachusetts.

Does it look like New Jersey? : Yes, almost. Being an Eastern state and an old state, Massachusetts has a similar feel to New Jersey. The residential areas looked close enough. The only scene that stood out was the airport scene where it felt a little bit desolate for Northern NJ, but there are similar stretches of road in that area like Eisenhower Parkway.

Does the movie make any New Jersey cliche jokes? : No. The characters in the film are the same type of normal, and sometimes eccentric people that you would find anywhere. No inaccurate crazy accents and pretty much no New Jersey jokes at all.

Is it a good movie ? : The movie really works for the first half. It is funny and likable and entertaining. But in the second half it wants to become Die Hard in a Mall and that doesn’t really work well because we know with the comedic tone, that no one is really in danger of getting killed. If they had kept the tone more humorous throughout, it would have been better. It is still worth seeing.

Comments : Bobby Cannavale plays a New Jersey S. W. A. T. Commander. He has now been in at least 4 movies where he has played a character from New Jersey. I don’t know if he searches out the roles or if producers just think he represents New Jersey, but it makes sense since he is from New Jersey.