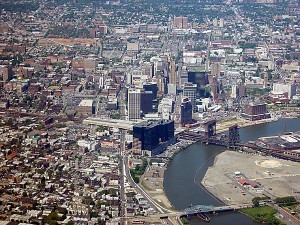 I worked in Newark for about eight years. Inevitably, every time summer rolled around complaints were heard throughout the office about the oppressive heat.

“Why is it cooler at home?”

“Is it me, or is it REALLY hot outside?”

“Is Newark actually the gate to hell?”

We watched the weather forecasts and our feelings were vindicated.  It really WAS hotter in Newark.  But, why?  A New York Times article explained it yesterday.  We weren’t imagining it.  The weather guys weren’t just making Newark hotter because they wanted to make it seem cooler in NYC.

Apparently, it is caused by a few factors.  First, there are no large bodies of water near Newark.  New York Harbor is five miles away which is too far for cooling breezes to hit the city.  Also a factor, not enough green spaces.  Parks, trees and grass help cool a region and Newark’s urban parks are woefully inadequate.  The final reason cited by the article:  proximity to sea level.  Cities that are raised up a bit from sea level take advantage of the cooler air farther up in the atmosphere.  So, basically, there’s nothing Newark can do.  Except buy more A/C.

Newark Is Hotter Than Its Neighbors – NYTimes.com.