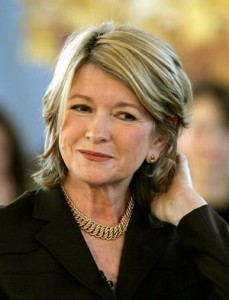 Martha Stewart was born in Jersey City, New Jersey to Polish American parents, Edward “Eddie” Kostyra and Martha Ruszkowski Kostyra. She lived in Jersey City until the age of 3, when her family moved to Nutley. She was raised in Nutley along with her five siblings. She took the name “Grace” for her confirmation name before graduating from Nutley High School.

Her first brush with fame came in 1961. She became the occasional babysitter for the children of Mickey Mantle, Yogi Berra, and Gil McDougald of the New York Yankees. The Mantles had four boys, all under the age of ten and Merlyn Mantle was overwhelmed. Martha would organize birthday parties and babysit for all four. “They would behave for Martha”, declared Martha, and her domestic career thus began.

Stewart’s mother taught her how to cook and sew. Later, she learned the processes of canning and preserving when she visited her grandparents’ home in Buffalo, New York. Her father had a passion for gardening, and passed on much of his knowledge and expertise to his daughter. Stewart was also active in many extracurricular activities, such as the school newspaper and the Art Club. During this time, Stewart began a modeling career. She was hired and appeared in several television commercials and magazines, including one of Tareyton’s famous “Smokers would rather fight than switch!” cigarette advertisements. Finishing with straight A’s, she was awarded a partial scholarship to Barnard College in New York City.

Initially intending to major in chemistry, she switched to art and European history, and later architectural history. It was around this time that she met and later married Andrew Stewart, on July 1, 1961. She left Barnard but continued her moderately successful modeling career, while her husband finished his law degree at Yale Law School. She returned to Barnard a year later, to graduate with a double major in history and architectural history. In 1965, her only child, daughter Alexis Stewart, was born.

At this time, Stewart began to hone and develop her business skills. In 1967, she became a stockbroker.

Stewart and her move to Westport, Connecticut. They purchased and undertook a restoration of the 1805 farmhouse on Turkey Hill Road that would later become the model for the TV studio of the Martha Stewart Living show. Stewart and her husband undertook the entire venture by themselves. During the project, Stewart’s panache for restoring and decorating became apparent. In 1976, Stewart started a catering business in her basement with a friend from her modeling days, Norma Collier. The venture quickly became successful, but soured when Collier alleged that Stewart was difficult to work with, and was also taking catering jobs on the side. Stewart soon bought her portion of the business. Stewart was also hired as the manager of a gourmet food store, the Market Basket but after a disagreement with the owners at the mini-mall she was forced out and opened her own store.

Andrew Stewart had become the president of prominent New York City publisher, Harry N. Abrams, Inc. In 1977, he was responsible for releasing the English-language edition of The Secret Book of Gnomes series, by Dutch authors Wil Huygen and Rien Poortvliet, which quickly became a blockbuster success and was on The New York Times Best Seller list. He contracted Martha’s company to cater the book release party, where Stewart was introduced to Alan Mirken, head of Crown Publishing Group.

Mirken was impressed by Stewart’s talent and later contacted her to develop a cookbook, featuring recipes and photos from the parties that Stewart hosted. The result was her first book, Entertaining, ghostwritten by Elizabeth Hawes. From there, word of her skills and business grew and Entertaining became a New York Times Best Seller, and the best-selling cookbook since Julia Child and Simone Beck’s Mastering the Art of French Cooking, released two decades earlier.

The rest is television and prison history.