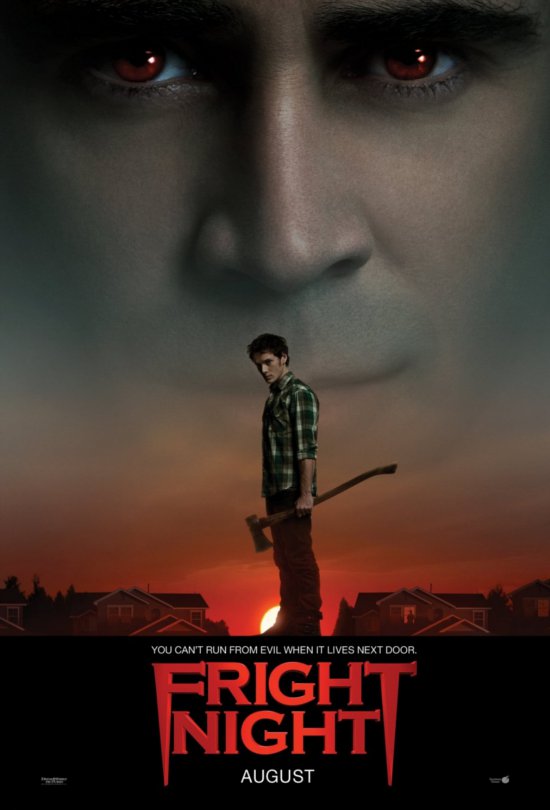 Night is a remake of the 1985 movie of the same name, but unlike other recent remakes, this film is actually good. Anton Yelchin plays Charley Brewster, a high school student that suspects that his neighbor Jerry, played by Colin Farrell is secretly a vampire. Actually it’s his friend Ed that thinks Jerry is a vampire but it eventually sinks in to Charley as well. It is hard to watch this movie without comparing it to the original.

This new movie is actually competent, unlike a lot of other remakes lately. Colin Farrell nails the role perfectly and gives the best performance in the movie. David Tennant plays Peter Vincent, a Criss Angel type Vegas magician that Charley goes to for help. Charley;s friend Ed is played by Christopher Mintz-Plasse in a role that you wish was bigger. The story moves along at a brisk pace, maybe a little too fast especially for the character of Ed.

Like a lot of other remakes, this film feels sanitized and lacks the atmosphere and intensity of the original. However it still has scenes of real suspense and some nice cinematography including at least one very innovative scene filmed in a car. And the logic of a vampire moving into the type of community in the film makes perfect sense. The movie does a good job of not insulting the intelligence of the audience.

The biggest problem with the movie is that the actors don’t follow Farrell’s lead of bringing the gravity and undertones of what a vampire is. Christopher Mintz-Plasse also does a decent job of vampire common sense and dark humor but isn’t given a lot of screen time to do so. Overall, the movie is well done and entertaining but feels like a light version of the original.

Pin It
Previous post:
Hurricane Irene Video – Venice Anyone? Next Post:
What’s Fresh This Week at the Farmers’ Markets?