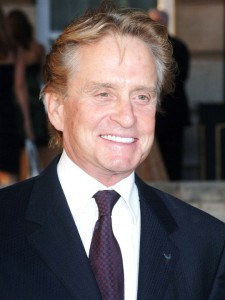 Douglas attended The Choate prepatory school (now Choate Rosemary Hall) in Wallingford, Connecticut. He received his B.A. in drama from the University of California, Santa Barbara in 1968, where he was also the Honorary President of the UCSB Alumni Association. He studied acting with Wynn Handman at The American Place Theater in New York City.

Douglas started his film career in the late 1960s and early 1970s, appearing in little known films like Hail, Hero! and Summertree. His first significant role came in the TV series The Streets of San Francisco from 1972 to 1976, where he starred alongside Karl Malden. Douglas later said that Malden became a “mentor” and someone he “admired and loved deeply”. After Douglas left the show, he had a long association with his mentor until Malden’s death on July 1, 2009. In 2004, Douglas presented Malden with the Monte Cristo Award of the Eugene O’Neill Theater Center (named for the father of Bermuda-born Oona O’Neill) in Waterford, Connecticut, for the Lifetime Achievement Award.

In 1975, Douglas received from his father, Kirk Douglas, the rights to the novel One Flew Over the Cuckoo’s Nest. Michael went on to produce the film of the same name with Saul Zaentz. Kirk Douglas considered playing the starring role himself, having starred in an earlier stage version, but chose against it, considering himself too old. The lead role went instead to a young Jack Nicholson, who would go on to win the Academy Award for Best Actor. Douglas won the Award for Best Picture for producing the film.

The rest is Hollywood History.

Pin It
Previous post:
Music – MAN OVERBOARD – Acoustic In-Store at ‘Tunes’ in Voorhees NJ – Self Titled LP Out This Tuesday September 27 Next Post:
What’s Fresh This Week at the Farmers’ Markets?