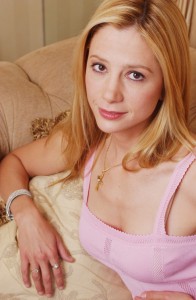 Sorvino was born in Tenafly and is the daughter of Lorraine Davis, a drama therapist for Alzheimer’s disease patients and former actress, and Paul Sorvino, an Italian American character actor and director. She has two siblings, Michael and Amanda; the latter is a playwright.

Sorvino spent the next three years in New York City, trying to make a name for herself as an actress. When the 1993 film Amongst Friends entered pre-production, she was hired as third assistant director, then was promoted to casting director, then to assistant producer, and was finally offered a lead role. Positive reviews opened doors for her.

After small roles in Robert Redford’s Quiz Show and Whit Stillman’s Barcelona, she was cast in the 1995 Woody Allen film Mighty Aphrodite. Her portrayal of a happy-go-lucky prostitute made her a star, winning her an Academy Award and Golden Globe for Best Supporting Actress.