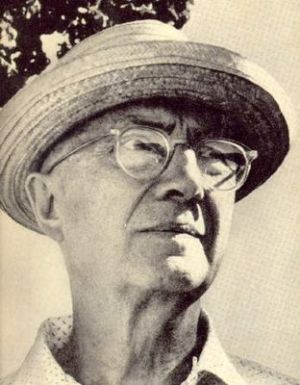 Williams was born in Rutherford, New Jersey to an English father and a Puerto Rican mother. He received his primary and secondary education in Rutherford until 1897, when he was sent for two years to a school near Geneva and to the Lycée Condorcet in Paris. He attended the Horace Mann High School upon his return to New York City and after having passed a special examination, he was admitted in 1902 to the medical school of the University of Pennsylvania.

Williams married Florence Herman (1891–1976) in 1912, after his first proposal to her older sister was refused. They moved into a house in Rutherford, New Jersey, which was their home for many years. Shortly afterward, his first book of serious poems, The Tempers, was published. On a trip to Europe in 1924, Williams spent time with writers Ezra Pound and James Joyce. Florence and Williams’ sons stayed behind in Europe to experience living abroad for a year as Williams and his brother had in their youth.

Although his primary occupation was as a doctor, Williams is best known for his literary accomplishments. His work consists of short stories, poems, plays, novels, critical essays, an autobiography, translations and correspondence. He wrote at night and spent weekends in New York City with friends—writers and artists like the avant-garde painters Marcel Duchamp and Francis Picabia and the poets Wallace Stevens and Marianne Moore. He became involved in the Imagist movement but soon he began to develop opinions that differed from those of his poetic peers, Ezra Pound and T. S. Eliot. Later in his life, Williams toured the United States giving poetry readings and lectures.

During the First World War, when a number of European artists established themselves in New York City, Williams became friends with members of the avant-garde both American, such as Man Ray, and visitors from Europe, such as Francis Picabia, and Marcel Duchamp. In 1915 Williams began to be associated with a group of New York artists and writers known as “The Others.” Founded by the poet Alfred Kreymborg and by Man Ray, this group included Walter Conrad Arensberg, Wallace Stevens, Mina Loy, Marianne Moore and Duchamp. Through these involvements Williams got to know the Dadaist movement, which may explain the influence on his earlier poems of Dadaist and Surrealist principles. His involvement with The Others made Williams a key member of the early modernist movement in America.

Williams disliked Ezra Pound’s and especially T. S. Eliot’s frequent use of allusions to foreign languages and Classical sources, as in Eliot’s The Waste Land. Williams preferred to draw his themes from what he called “the local.” In his modernist epic collage of place, Paterson (published between 1946 and 1958), an account of the history, people, and essence of Paterson, New Jersey, he examined the role of the poet in American society. Williams most famously summarized his poetic method in the phrase “No ideas but in things” (found in his poem “A Sort of a Song” and in Paterson). He advocated that poets leave aside traditional poetic forms and unnecessary literary allusions, and try to see the world as it is. Marianne Moore, another skeptic of traditional poetic forms, wrote Williams had used “plain American which cats and dogs can read,” with distinctly American idioms.

One of his most notable contributions to American literature was his willingness to be a mentor for younger poets. Though Pound and Eliot may have been more lauded in their time, a number of important poets in the generations that followed were either personally tutored by Williams or pointed to Williams as a major influence. He had an especially significant influence on many of the American literary movements of the 1950s: poets of the Beat Generation, the San Francisco Renaissance, the Black Mountain school, and the New York School. He personally mentored Theodore Roethke, and Charles Olson, who was instrumental in developing the poetry of the Black Mountain College and subsequently influenced many other poets. Robert Creeley and Denise Levertov, two other poets associated with Black Mountain, studied under Williams. Williams was friends with Kenneth Rexroth, the founder of the San Francisco Renaissance. A lecture Williams gave at Reed College was formative in inspiring three other important members of that Renaissance: Gary Snyder, Philip Whalen and Lew Welch. One of Williams’ most dynamic relationships as a mentor was with fellow New Jerseyan Allen Ginsberg. Ginsberg claimed that Williams essentially freed his poetic voice. Williams included several of Ginsberg’s letters in Paterson, stating that one of them helped inspire the fifth section of that work. Williams also wrote introductions to two of Ginsberg’s books, including Howl. Williams sponsored unknown poets such as H.H. Lewis, a radical Missouri Communist poet, who he believed wrote in the voice of the people. Though Williams consistently loved the poetry of those he mentored, he did not always like the results of his influence on other poets (the perceived formlessness, for example, of other Beat Generation poets). Williams believed more in the interplay of form and expression.

After Williams suffered a heart attack in 1948, his health began to decline, and after 1949 a series of strokes followed. He also underwent treatment for clinical depression in a psychiatric hospital during 1953. Williams died on March 4, 1963 at the age of seventy-nine at his home in Rutherford. He was buried in Hillside Cemetery in Lyndhurst, New Jersey.

Two days after his death, a British publisher announced that he was going to print his poems. During his lifetime, Williams had not received as much recognition from Britain as he had from the United States, and Williams had always protested against the English influence on American poetry.

Williams’ major collections are Kora in Hell (1920), Spring and All (1923), Pictures from Brueghel and Other Poems (1962), Paterson (1963, repr. 1992), and Imaginations (1970). His most anthologized poem is “The Red Wheelbarrow,” considered an example of the Imagist movement’s style and principles (see also “This Is Just To Say”). However, Williams, like his associate Ezra Pound, had long ago rejected the imagist movement by the time this poem was published as part of Spring and All in 1923. Williams is more strongly associated with the American Modernist movement in literature, and saw his poetic project as a distinctly American one; he sought to renew language through the fresh, raw idiom that grew out of America’s cultural and social heterogeneity, at the same time freeing it from what he saw as the worn-out language of British and European culture.

Williams tried to invent an entirely fresh form, an American form of poetry whose subject matter was centered on everyday circumstances of life and the lives of common people. He then came up with the concept of the variable foot evolved from years of visual and auditory sampling of his world from the first person perspective as a part of the day in the life as a physician. The variable foot is rooted within the multi-faceted American Idiom. This discovery was a part of his keen observation of how radio and newspaper influenced how people communicated and represents the “machine made out of words” (as he described a poem in the introduction to his book, The Wedge) just as the mechanistic motions of a city can become a consciousness. Williams didn’t use traditional meter in most of his poems. Williams experimented with different types of lines and eventually found the “stepped triadic line,” a long line which is divided into three segments. This line is used in Paterson and in poems like “To Elsie” and “The Ivy Crown.” Here again one of Williams’ aims is to show the truly American (i.e., opposed to European traditions) rhythm which is unnoticed but present in everyday American language. Stylistically, Williams worked with variations on free-form styles, notably developing and utilising the triadic line as in his lengthy love-poem Asphodel, That Greeny Flower.

Modern liberals portray Williams as aligned with liberal democratic issues; however, as his publications in more politically radical journals like New Masses suggest, his political commitments were further to the left than the term “liberal” indicates. He considered himself a socialist and opponent of capitalism, and in 1935 published “The Yachts,” a poem which indicts the rich elite as parasites and the masses as striving for revolution. The poem features an image of the ocean as the “watery bodies” of the poor masses beating at their hulls “in agony, in despair,” attempting to sink the yachts and end “the horror of the race.” Furthermore, in the introduction to his 1944 book of poems “The Wedge,” he writes of socialism as an inevitable future development and as a necessity for true art to develop. In 1949, he published a booklet/bar “The Pink Church” that was about the human body but was understood, in the context of McCarthyism, as being dangerously pro-communist. The anti-communist movement led to his losing a consultantship with the Library of Congress in 1952/3, an event that contributed to his being treated for clinical depression. In an unpublished article for Blast, Williams wrote artists should resist producing propaganda and be “devoted to writing (first and last).” However, in the same article Williams claims that art can also be “in the service of the proletariat.”

In May 1963, he was posthumously awarded the Pulitzer Prize for Pictures from Brueghel and Other Poems (1962) and the Gold Medal for Poetry of the National Institute of Arts and Letters. The Poetry Society of America continues to honor William Carlos Williams by presenting an annual award in his name for the best book of poetry published by a small, non-profit or university press.

Williams’ house in Rutherford is now on the National Register of Historic Places. He was inducted into the New Jersey Hall of Fame in 2009.

Pin It
Previous post:
The Continental, Atlantic City – Review Next Post:
New Jersey : Third Richest State in the U. S.