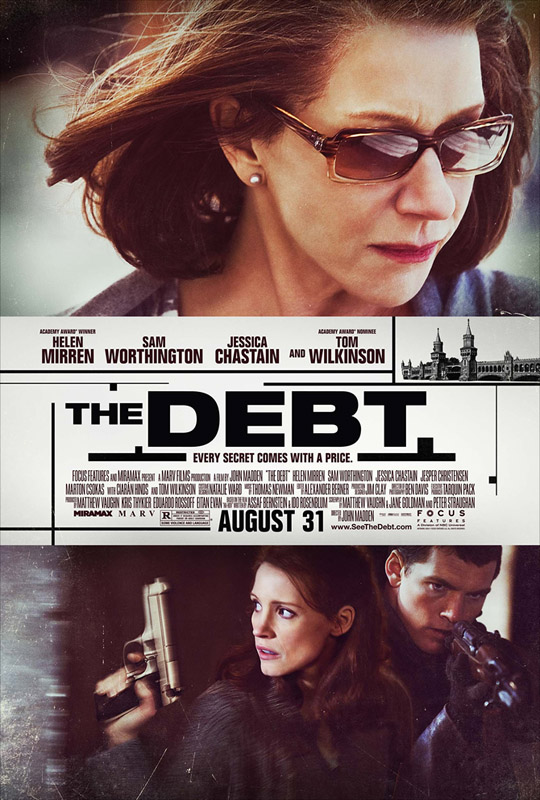 The Debt is about a team of Secret Agents that tracked down a Nazi war criminal in 1966, and there is a parallel story set in 1997 involving the same three characters. They are celebrated as heroes so much so that Rachel (Helen Mirren)’s daughter has written a book about their exploits. What no one knows however, is that the three ex-agents have a secret about what went down 30 years ago. Are the parallel time-lines just a gimmick or does the movie make them work?

Once I realized what this movie was really about, I became truly engrossed and was really impressed. The story involves some elements of substantial historical significance but is told in a personal, small scale setting focusing on the dynamics of a small group of characters. This is extremely effective. The acting and dialog are top notch, and like any small scale dialog driven film, this could easily be a stage play. Helen Mirren, Tom Wilkinson, Sam Worthington, Jessica Chastain and the rest of the cast do an excellent job. For Worthington, this is another excellent role that fits him well like his roles in Terminator : Salvation and Avatar, and much better than his recent role in Clash of the Titans. The movie reminded me most of Atonement. There are some similar themes and story telling structure elements.

This is an intelligent movie, well-written and acted and it far exceeded my expectations. This is one of the better movies that I have seen this year.