New Jersey Dodges Recent Flood Scare, But Why Does it Flood So Frequently Now? 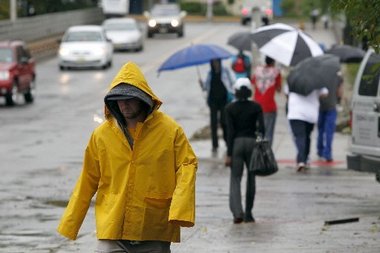 It looks like we have dodged a bullet as a storm system that had been predicted to trigger floods in some parts of the ground-soaked state had instead steered west, National Weather Service meteorologists said. A flood watch issued for parts of the state was canceled today and was not expected to be reissued. But why does it flood so much more in New Jersey than it used to?

The big question is why it takes so little water to flood areas like Wayne and Little Falls and close roads and businesses? What used to happen maybe once every 10 years is now becoming a yearly or multiple times per year ocurrence. But it’s not raining more than it used to. Severe flooding is happening now with a lot less rain having fallen. What is going on?

There are a couple reasons why this could be happening. One is that more areas have been developed. This means there is more pavement and concrete and less undeveloped land that can absorb the rain like a sponge. Another possibility that is being discussed and debated is the Pompton Lakes Dam. The Government is now looking into concerns that have been expressed by residents of flood prone towns.

The anger stems from the Pompton Lakes Dam and its two floodgates, which were installed in 2007, on the Ramapo River. Many residents say the floodgates are malfunctioning and making the flooding worse. Some homeowners said they are tired of evacuating and coming home to destroyed property year after year.

In March of this year, the state has commissioned an independent study to consider whether changes to the Pompton Lakes Dam will cut down on flooding in North Jersey. No word yet, but the answer can’t come soon enough for people who live with the constant possibility of their property being destroyed and being evacuated from their homes and all of the businesses that lose countless days of operation as a result of being closed for days, flood damage and closed roads

Article on flooding that will miss us

NJ.com article on the Study being done on the Pompton Dam