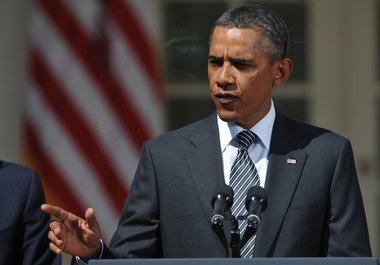 President Obama is coming to New Jersey on Sunday to take a look at the damage caused in Paterson by Hurricane Irene. I guess he needs proof before we get the aid money.

I guess you could say that he is visiting so he can get a first hand look at what happened and so he can understand the scope of the damage better, but these visits from politicians never seem to be anything more than a publicity stunt. By Sunday, the flood waters will have gone down and things don’t look that different after that happens, except for all the garbage on the street of people’s ruined possessions. He should have come on Tuesday when the water was high to see how people can’t get around for days and businesses lose money by being closed for days. Most of what happened will be gone, cleaned up, or hidden inside buildings when he gets here.

New Jersey lawmakers have asked the president to expedite federal disaster aid, as New Jersey towns continue to suffer flooding from rain-swelled rivers. What stuns me is how much “shocking” video is shown and all the talk leading up to the hurricane and afterwords without a word about why it is happenening and what could be done to prevent it or fix it. This area didn’t always flood like this even when it rained this much. A big reason for the problem is all of the developing, especially in swampland areas that would act like a sponge and gradually soak up the water. Add to that houses that were summer homes along the river that were turned into permanent all-year homes and mismanaging dams and other water control systems. Those are just a couple reasons that could be dealt with. The problem is that things were allowed to be done that shouldn’t have been and until they are fixed this is going to happen again and again.

Obama’s announcement comes days after he declared a state of emergency for the Garden State, a move that makes federal resources and funds for Irene’s cleanup. Monday, Christie lobbied the president to make the state a disaster area, enabling federal funds to help individuals and communities recover from the Hurricane immediately.