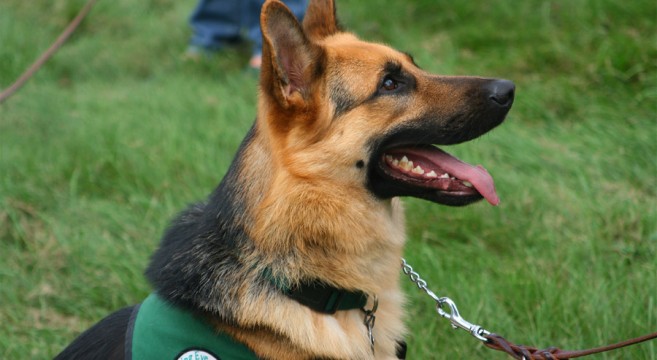 Being on the mailing list for The Seeing Eye has several advantages.  Mostly, I love getting the mailings to see how these amazing dogs and their equally amazing trainers are doing.  The mailings always have lots of puppy pictures and really cool stories on how one of the Seeing Eye dogs has changed someone’s life.   However, in August they announced that they were opening their doors to the public for the first time in 30 years.  New advantage!  I almost immediately bought tickets.  900 tickets were sold and they sold out a few days before the event.  Visiting a New Jersey non-profit that does amazing work for people all over North America AND masses of well-trained puppies and adult dogs all in one day? Yes, please!

Walking up the driveway, we ran into the President and CEO of The Seeing Eye, James Kutsch, Jr., his wife, Ginger, and their two guide dogs.  They welcomed us and told us how to approach the actual working dogs that would be on campus and also how to deal with dogs you meet in public. 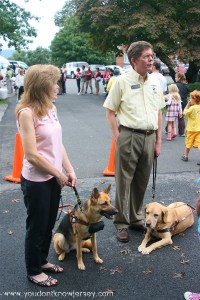 The nicest thing about the whole visit was how they carefully informed us throughout the different stations outside and on the facility tour about how to interact with guide dogs as we see them out in the public.  It was really informative and interesting to hear how people usually act and what we really should do when we see someone working with a guide dog.  When we meet a guide dog in public we should not look the dog in the eyes since they are exceptionally socialized.  This could interrupt the dog while she’s working and put the animal and his owner in jeopardy.  You should also never try to pet the dog unless you ask and it’s been OK’d.  Be prepared to be turned down, though.  We heard that most owners don’t want people to pet their dogs.  It’s not being mean, it’s keeping them safe from obstacles that the dog might protect them from.

We also learned that a “Seeing Eye” dog is actually a trademarked name for dogs that come from the Morristown organization.  The generic name for these dogs is “guide dog.”

First thing we did was head over to the puppy tent where puppy raisers (who can be from the general public or from an organization like the Girl Scouts or 4-h) were introducing their puppies.  The Seeing Eye breeds their own dogs (German Shepherds, Labrador Retrievers, Golden Retrievers and Labrador-Golden mixes) and sometimes purchase Boxers to train for people who are allergic to long-haired dogs. Puppy handlers get their puppies around seven or eight weeks of age and teach them basic commands and obedience along with socializing the puppies to get along with other animals and people and also be comfortable in a variety of places. Outside the tent, the puppy raisers ran a training session for us.  Click on the Photos and Video link at the bottom of this post to see that adorableness in video. 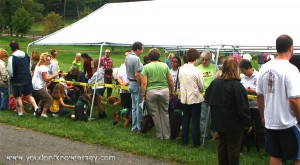 You should also check out www.seeingeyepuppy.com to read a blog about Vinson, a puppy currently being raised to become a Seeing Eye dog.  We met him while he was in the puppy tent and his raiser let us know about the blog.  She said it’s especially good for kids to learn about guide dogs and how they are trained.

After the puppy tent, we saw some training demonstrations to see how adult dogs learn how to avoid obstacles and work with a person to navigate roads and sidewalks. 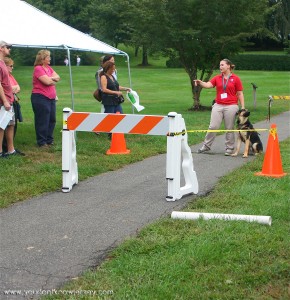 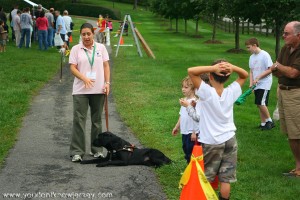 After the demonstrations outside, we headed over to the facility tours.  It was a small line that quickly grew much larger but puppy raisers were stationed around the line to answer questions and for us to meet more dogs and hear more about the organization.  The amount of thought put into the Open House was most apparent here because we could see that anywhere there might be a bottleneck of people waiting, there were dogs and handlers waiting to meet and talk with us. While in line, we met George and his owner.  George was a Golden Retriever who was singled out of training to be a part of the breeding program.  After a few years in the breeding program, he was retired and moved in with the family who raised him as a puppy.  He now serves as an ambassador for The Seeing Eye. 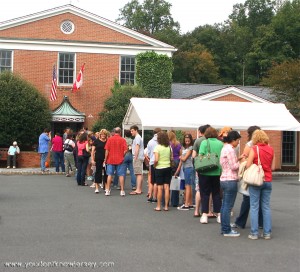 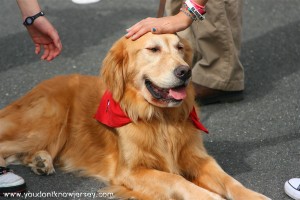 George and his grueling job of getting petted

Once inside, we walked through the buildings where the student lived while training with their dogs, the veterinary clinic and the kennel areas where dogs in training before they are placed with a student. We saw training dogs so that students can learn to use the harness without stressing his real dog out. 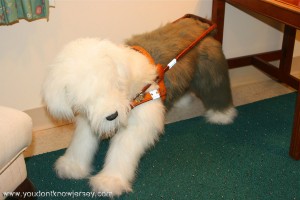 In the vet’s office, they had stuffed dogs acting as patients which was really cute. 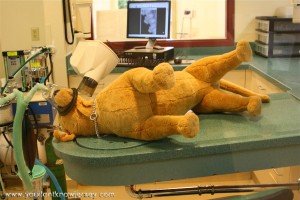 We also saw where the dogs live after coming back from the puppy raisers but before they are fully trained and ready for the students. Trainers were with them at all times during this play session so that no one got out of hand.  They really like play time! 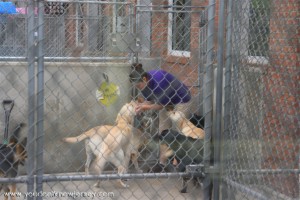 While walking between buildings, we saw that the campus grounds were beautiful.  There were lots grassy areas with tables and chairs and many really nice sculptures of important people in The Seeing Eye’s history and also artistic renderings of students and their dogs. 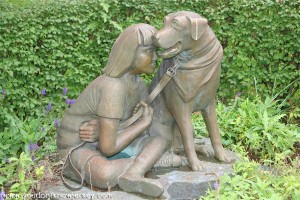 We had a great time at The Seeing Eye’s Open House.  Thanks to all who made it possible and we hope that it won’t be another 30 years before the next one!

Check out our photo essay (and video!) with all the pictures from this post and many more here.

The photo of the day?  Our favorite name in the puppy picture line-up at the refreshment station! 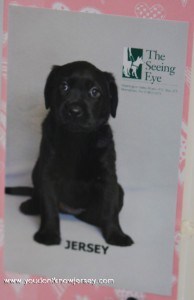