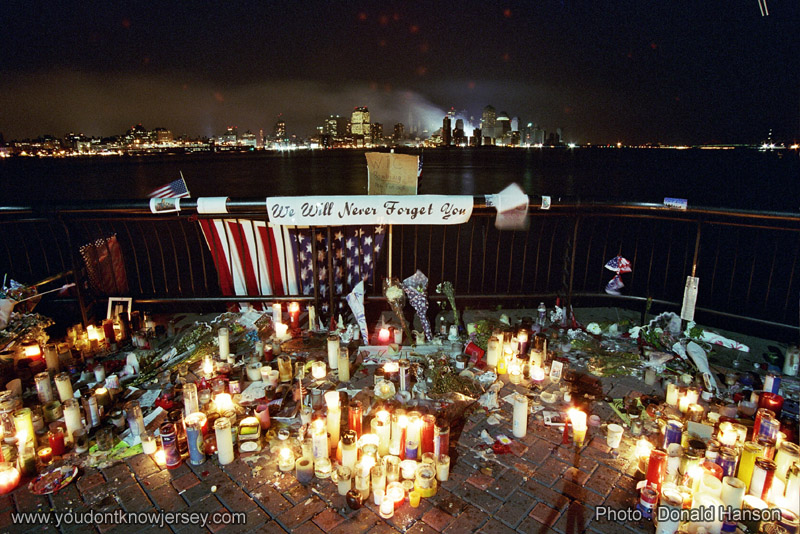 It’s a question that inevitably comes up when topics like the Kennedy assassination, Pearl Harbor, floods and blackouts are being discussed.  People alive in 2001 all have one more memory to add to this list:  Where were you on September 11th?

We thought we’d share our stories with you today as we’re getting ready to remember the tenth anniversary of that terrible day.

On September 11, 2001, I got to work in Newark around 7:50 and was just settling into a day of work when all at once, it seemed, every phone in every cubicle and office began to ring.  It sounded literally simultaneous throughout the floor.  I actually thought it might be a phone malfunction because the office technology still had some growing pains. Finally, after a few office-wide phone rings, I looked down at my own phone and saw on CallerID that Ed was calling me.

I picked up the phone and he said to go to CNN’s website because a small plane had hit the World Trade Center.  For about five minutes, I was able to see the pictures on CNN.com and then it quickly slowed to a crawl and I couldn’t see anything else.  By this time, other people in the office were walking around trying to see if we had a view of downtown NYC.  I joined them and finally we found a window in the cafeteria that had an oddly framed view of exactly the area of downtown where the towers were.  It was almost like the other buildings in Newark had parted just so we could see the World Trade Center.

A few of us were watching the fire and talking about pilot error when the second plane hit.  We couldn’t see the actual impact but we saw the fireball. Talk immediately turned to terrorism and we were scared.  We were in the tallest building in Newark and not knowing any details we began to think that perhaps planes taking off from Newark International Airport might see us as a target.  As news began trickling in from phone calls and the radios we had, we knew that other planes were out of contact and some of us decided to get out of the building and be outside.

I took my cell phone but I didn’t bring a wallet or anything because I thought I’d go back in soon.  I called Ed from outside to let him know where I was. After awhile, I decided that I should see if we were being sent home so I tried getting back up into the office building.  I got to the door and was told that the building was locked down and I couldn’t get in.  I didn’t know what to do!

I stood around the outside of the building for awhile and then saw someone I had trained with as new employees together.  I knew he lived out in the mountain areas of New Jersey where I also lived at the time so I wanted to see how he was getting home.  He was also stuck outside and had found out that New Jersey Transit was shut down so he didn’t have a way home.  We quickly worked out a deal that if he paid for a cab to Wayne (about a $60 cab ride), I would get Ed’s car and would drive us the rest of the way home.

In the cab, we heard on the car radio that the towers had fallen.  I’d been outside and out of communication when both of them fell and didn’t know.  I was shocked!  We were driving up Route 21 and I was trying to turn around in the car seat and see behind us.  The cab ride was basically stunned silence while listening to the radio reports.

Once we got to Wayne and we got Ed’s car, we started out to Parsippany and continued listening to the news.  After a few minutes, I mentioned that I didn’t want to listen to the news anymore and we agreed that we’d turn it off.  Ed a Smiths tape in the cassette deck and we listened to Morrissey for the rest of the way home. 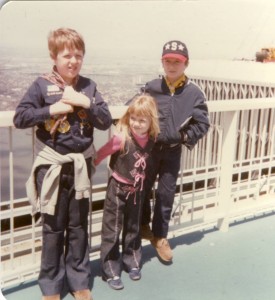 “A plane just crashed into the Twin Towers”. I still remember a co-worker telling me this that morning ten years ago as I sat in my basement cubical. She said they had the TV on in the cafeteria if you want to see it on the news. I remember I didn’t even get up at first. Like a lot of people I had assumed that it must have been a small plane. Probably an inexperienced pilot. I called Alice and told her to check out CNN.com as I heard a plane crashed into the World Trade Center. By the time I made it upstairs and saw the hole from impact and the billowing smoke I know it was more serious.

Was this an accident? Was it terrorism? A little while later that question was answered as the second plane crashed into the South Tower. That is when the shock of what was happening set in. It was very surreal. In a small amount of time we went from a normal boring workday to something very different.

Once we knew this was an attack I rushed back to my desk to call Alice back. She worked in Newark, this day too frighteningly close to downtown Manhattan. It didn’t help my nerves that she worked in the tallest building, 744 Broad Street, and worked right near Newark Airport. It was hard getting through but still remember the phone call. Basically “get home now”. Alice took NJ Transit to work but they shut down. Luckily she found a co-worker who shared a taxi all the way to Wayne to get my car. I worked for a big oil company in the marine division and there was concern that the ports of the US could be a target so we couldn’t leave right away.  After a few hours we were able to go.  Alice and I met up later at our friend’s house where we were living at the time. 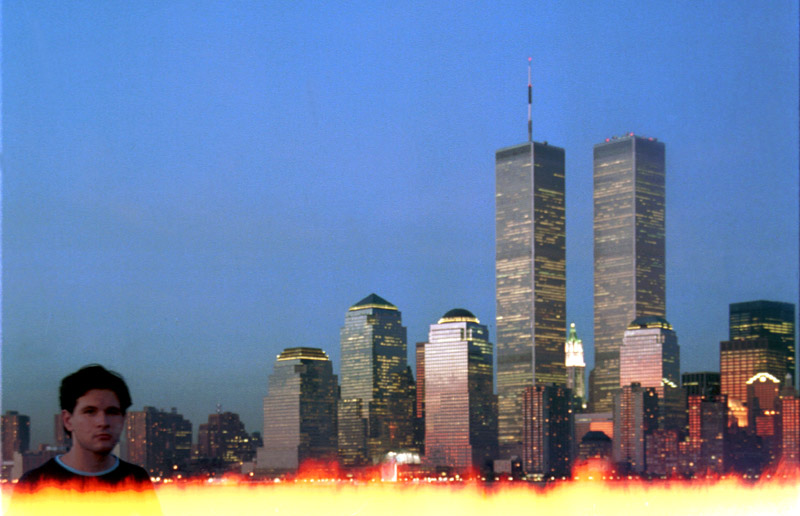 I was at work when we got a phone call that a plane had flown into one of the Twin Towers. We went on the internet to a news site and found the feature story that showed a picture of what the hole in the building looked like. At the time is was not common to find video online as it took up too much bandwith. The article cited the history of planes hitting buildings like when a plane hit the Empire State Building in Foggy weather. At the time the news organizations and everyone else thought that this was simply a mistake, maybe some sort of technical malfunction. We had an old TV in one of the back rooms. We turned it on and could see barely more than static. But we did find a station that we could make out a picture, ABC I think. After watching a minute or two we saw a plane flying in from the side. It looked like it was going really slow and maybe it worked for the news. All of a sudden, the picture went blank to all static. It was a few minutes later that we found out that it hit the other tower and even at that point, it seemed like there was some sort of directional beacon that was leading the planes to the same location creating some sort of error flight path.

Finally, an article online mentioned that they thought it was a terrorist attack. With the TV useless, we could only get our information online so we really didn’t have any access to video at all. Plus, we were at work and not really allowed to go on the internet and had work to do anyway. Next we heard about the plane hitting the Pentagon and at that point they were grounding all planes in the air. I think at that point there were 10-12 planes still in the air and we thought that they would hit many more targets. Luckily, this turned out not to be the case and the Pennsylvania one was downed as a result of passenger uprising. A little later we heard that one of the towers collapsed and that the other one was in bad shape. And eventually we found out that the other Tower fell as well. I remeber picturing in my mind what must have happened when the building fell as we had no access to video and did not know what it looked like when the Tower fell. We all pictured the building falling into many other buildings next to it considering the height of each building.

Customers who came in would give us updates and talk about their experiences. Some showed us pictures taken from different parts of New Jersey, but all you could really see was smoke. Someone tried to take pictures from Garrett Mountain, but the Police came to the overlook and suspected anyone there of being in on it and, after checking their IDs, told them to leave. Other locations with prominent views of the skyline were evacuated as well.

There was also talk of people jumping from the buildings which lead you to wonder how bad the heat was that it was so unbearable that they had to jump to what they knew would be their death. What a truly unthinkably horrible situation that must have been to be in. Late in the afternoon we heard that one of the smaller buildings was about to go. That was the last bit of news we received before I left for home.
When I got home, I finally had a chance to see what happened on the news as they were replaying various clips of video over and over. After being in the dark all day, I was very surprised at how the buildings fell, so straight and with such little damage to nearby buildings. If they had fallen over, there would have been a lot more buildings damaged and even more lives lost.

I remember in the days following the attack missing fliers were posted all over walls in the area of ground zero. Relatives of the victims had quickly put them together and a lot of the images showed happy faces of people living their everyday lives. I always remember on that had a mother feeding her child at what looked like breakfast and the caption said something like “Have you seen my mommy?” That was one of the saddest things I saw since there was little hope of finding anyone that was missing alive. The contrast of the peaceful idyllic image to the horrible event that had happened really got to me.