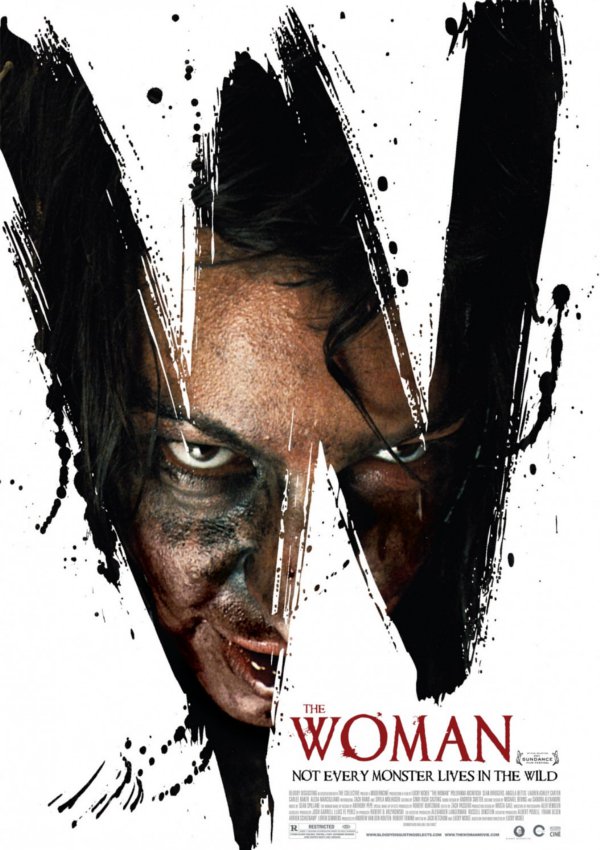 The title character of The Woman lives in the Wild like an animal with no regard or involvement with civilization. The plot of the movie involves a family man – a husband, father of 3 and successful lawyer discovering her, bringing her home and attempting to curb her animal tendencies and turn her into a civilized human being. But it is not as simple as what it looks like on the surface.

The Woman is based on a book co-written by New Jersey native Jack Ketchum and the director of the film, Lucky McKee. This movie is disturbing and insightful, twisted and sad and cuts right to the core of what makes for good horror. First and foremost this is a psychological horror that is character driven. Many characters in this film are hiding something, behaving one way while supressing something under the surface.

The acting is the movie is excellent, with great fits for each role. The role of the father is very well done, changing tones seamlessly and the role of the son is portrayed on a level above what most young actors usually accomplish when playing such a serious role. Even the supporting characters such as the teacher are intelligent, well thought out and complete.

This movie is extremely well made with each scene carefully laid out and methodical. The camerawork is very impressive in every scene helping to tell the story in a visual way. There is a scene where someone is walking down stairs and finds someone sitting in a chair and by the end of the scene, they switch positions. That scene is so well done and is a prime example of the well crafted cinematography.

The details are another place where this movie excels. From the way that the characters behave to the choice of set design everything is well thought out. This film contains secrets that you will discover as it unfolds. Some you may figure out before they are revealed, others are more outright surprises and there are also elements that you are never given complete explanations for. Those are the ones that you will be talking about and interpreting after the movie is over and will make you want to go out and read the book. This is character and story driven horror that deals with disturbing and insightful ideas. There should be more horror movies like this one.

You can see more of my Movie Reviews here