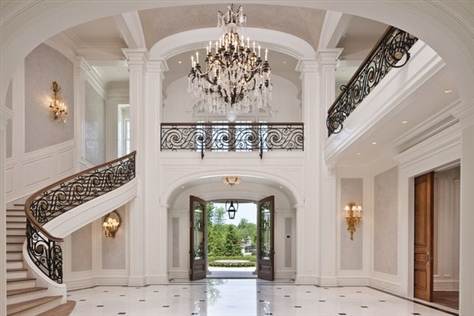 According to a Forbes Magazine article posted to msnbc, the most expensive ZIP code in the country in terms of asking price for single family homes and condos is Alpine, New Jersey with a median home price is $4,295,000. This is really no surprise. Alpine has topped real estate as well as per capita income lists for years. Several years ago when I saw it top an income list, my friend and I took a trip there.

Our goal was to see how different it would be from any other town. Did these people really live that differently from us? Was it like a different world? I don’t know what I had pictured but I wanted to find out. My goal was to find the downtown area. I felt that would reflect the wealth of the residents. Problem is, there is no downtown area or at least not that we could find. the next step was to look for the staples of any town : Library, Post Office, Police Station, those kinds of things. At least a Library would have been a social place that we could have compared to others, but we couldn’t find that either. We did see a building that was the town hall Police and Post Office I think, but that didn’t look much different from anyplace else. The real let-down was the lack of a downtown. There are a bunch of streets of mansions that have gates at the entrance but there are other streets that are accessible that you can drive through. All in all, we did not find what we came for.

A couple years later I was looking through the garage sale listings in the news paper and I saw one in Alpine. I wanted to go check this out to see if it might shed more light on this town. My friend and I proceeded to the address and discovered that it was on a gated street but it was open to grant access to the garage sale seekers. We pulled up to the house and got out of the car. We began to walk up the sidewalk in the front yard and saw that it became a bridge over a pond to get to the garage. We finally got to the garage sale and I was somewhat surprised to find that the prices were pretty much what you would find at any garage sale like there were a lot of things for $1, $5 or $10. The same kind of prices that you would find anywhere. A husband and wife selling the stuff. The most interesting thing that they were selling was a higher priced item, a racecar bed like a rich kid on a TV sitcom would have. My friend really liked it and kept looking at it and I remember the wife jokingly and enthusiastically saying to him ‘Buy-the-Bed!” in the style that a crowd would chant something at a sporting event. As we looked around, she kept lowering the price and repeating her selling phrase but we really had no room to fit the bed in the car anyway. I think we bought a video game system but even as we were leaving I remember the wife saying “Buy-the- Bed!” as a last attempt.

Later I learned that the population of Alpine is less than 2,000 people so that pretty much explains why there isn’t much in terms of a downtown area or much at all beyond the fancy houses. But beyond that and the gates, this town was not that much different from anywhere else. I also discovered later that a bunch of celebrities live in Alpine or close-by towns. Reasons for that probably include the large houses, the gates, and privacy of both the location and the fact that there aren’t many stores or places to attract people that are passing through. Also it has easy access to New York City as it is not far from the entrance to the George Washington Bridge.