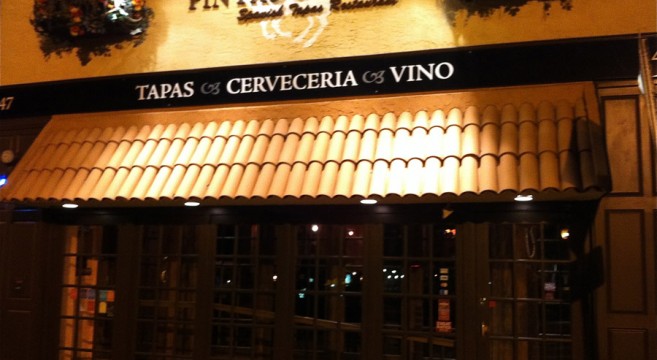 We had a special event to celebrate and were kicking around some dinner ideas but kept coming back to one word: tapas.  What we like about tapas is getting to taste lots of different flavor combinations without having to commit to just one entree.  We decided on Pintxo y Tapas in Englewood.

One of the best things about the restaurant, besides the food, is its excellent location right near BergenPAC.  If you’re in town for a show they have an abbreviated Pre-Theater menu so you can grab a quick bite before showtime. 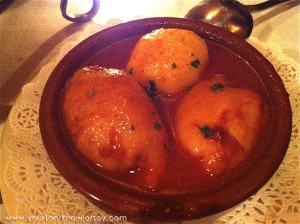 Though the entrees sounded delicious we stuck to our plan and focused on tapas.  There were a couple of highlights but the dish you see above was my favorite of the evening. Calamares Rellenos are squid stuffed with beef and garlic in a wine and tomato sauce.  The calamari was almost pasta-like, it was so fresh and soft.  The filling was dense with delicious ground beef and not overpoweringly garlicky.

In fact, really good ground beef was also found in another favorite dish of the evening:

The Empañadas de Carne at the top of the stand were so stuffed with delicious beef that we kept exclaiming over the super-meatiness of each bite.  The flaky dough was just tender and chewy enough to contain the filling without being too bready.

The rest of the dishes on this stand were good but nothing spectacular.  There were many cheese/sausage plates on the menu and the one we chose was fine but I would have liked a little more variety in cheese.  Obviously, we just should have chosen a different menu item. The potato dish in the middle was Patatas Bravas, potato cubes coated with tomatoes, hot paprika and wine sauce. These were very good but could have used something to pep them  up a little. Maybe more heat?  I’m not sure.  We just thought they were a nice side dish but nothing really incredible.

On our other tall stand of plates we had Bunuelo de Bacalao, fried salt-cod puffs, which were very good especially when drizzled with fresh lemon.  The star of this stand, though, was the Fabada Asturiana.  This stew had chunks of pork and blood sausage mixed with fava beans.  The beans made the stew really creamy and the meat made everything perfectly salty and delicious.  Quite frankly it was dreamy.  I’ve had this at other restaurants and it’s always good because it’s such a Spanish/Portuguese classic dish but Pintxo y Tapas really had one of the greatest versions I’ve ever had.  It wasn’t flashy with lots of different kinds of meat or anything different.  It was just three simple ingredients made perfectly.

The final item on this stand was supposed to be ham croquettes.  Oddly, we got four cheese croquettes and only two with ham.  While the cheese was good, we were really looking forward to some more pig in our croquettes.  But, I guess they all looked the same and someone got confused.  Either way, whatever kind of croquette you get, they’ll be good!

The last dish we ordered was the Albondiguillas Estofadas which were beef meatballs stewed in brandy sauce. They were good but like the potato dish could have used something to add a little oomph to the dish. 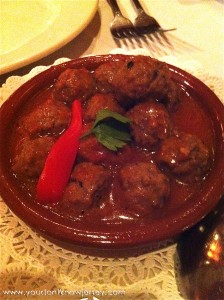 The meal also came with complementary soup which was Cream of Asparagus.  At the end of the night, when we tallied up what we liked and didn’t like, the soup came up at the top of the list with the squid and the fabada.  It was really creamy and thick and had plenty of finely chopped asparagus.  We used quite a few pieces of bread to get every last drop of that soup once we hit the bottoms of our bowls. 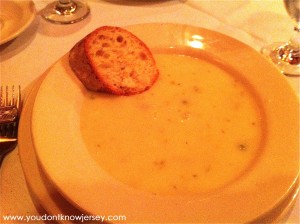 Check out all of our pictures from our special evening at Pintxo y Tapas in Englewood: 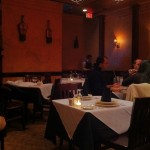 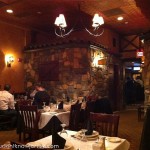 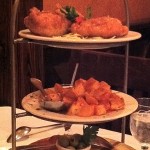 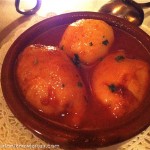 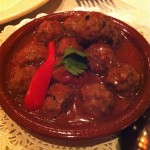 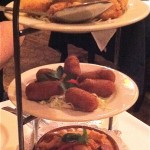 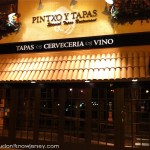 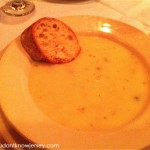 Pin It
Previous post:
‘The Dark Knight Rises’ Shoots at Newark City Hall – Nothing To See Here, Move Along’ Next Post:
Get Ready to Fall Back New Jersey – Daylight Savings Time is Almost Over