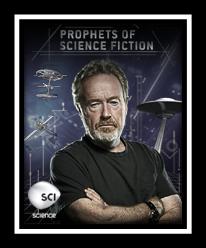 The Science Channel has been doing some great documentary work with shows like Wonders of the Universe and Through the Wormhole. Their newest show, Prophets of Science Fiction showcases writers whose work details ideas that would not become a scientific reality until many years later. The show is hosted by Ridley Scott and features interviews with historians, scientists and more.

The third episode, which premieres tonight November 23rd at 10pm ET/PT on SCIENCE, focuses on H. G. Wells. New Jersey residents may be familiar with Orson Welles 1938 radio broadcast adapting H. G. Wells War of the Worlds. It was set in Grover’s Mill, an unincorporated area in West Windsor Township, New Jersey. Many technological and theoretical ideas contained in H. G. Wells works either has come to pass or is of interest to researchers today.

Prophets of Science Fiction is a documentary series done in an informative and entertaining manner. It is not as easy as it sounds to pull that off. I have some knowledge of Science Fiction, but these shows bring to light things that I was unaware of. And it takes on the ideas with a great enthusiasm, wonder and intelligence. This show will not only educate you about the writer, their work and how it predated real world iterations of their ideas, but it will make you think as well.

Pin It
Previous post:
Your Donations on Their Way to Feed the Poor in NJ Next Post:
Have a Great Turkey Day!