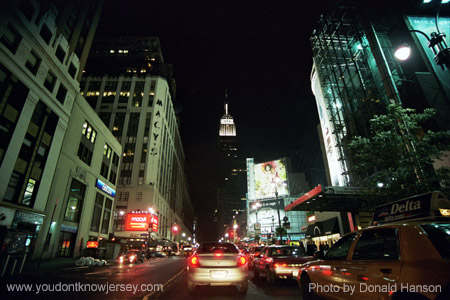 According to a new poll, when it comes to big cities, New Jersey residents feel safest in Manhattan. 78 percent said they feel somewhat or very safe there. 64 percent of those asked felt likewise about Atlantic City, 59 percent about Philadelphia, 43 percent shared that opinion of Trenton and only 13 percent felt that way about Camden.

I think that this is the case for a number of reasons. First, when Jersey residents go into Manhattan it is usually for some kind of event. Usually events take place in a busy business district or trendy area that has money. Upscale areas make people feel safe just as lots of people around do.

The primary reason I think people feel safe in New York is the sheer amount of people around and things going on. Crimes are usually committed when there are few if any other bystanders around. Like the old saying, there is safety in numbers.

Another element is familiarity. From my perspective, Jersey residents go to New York City for events and urban activities more than the other cities on the list, unless they live in one of them. I have gone into Manhattan hundreds of times and part of the reason I feel comfortable there is that I am familiar with it. In Philadelphia or Trenton I don’t know my way around and could easily get lost.

I am not surprised at all by the list as I feel similarly to the ones surveyed. Even though I know very little about them, I would put Atlantic City and Philadelphia above Trenton based on the experiences that I have had in the rare occurrences that I have been there and the feel of the city that you get when passing through.

Pin It
Previous post:
Before AMC’s Walking Dead there was ‘Zombie Hunters : City Of The Dead’ – Chiller Theatre Interview Next Post:
Clean Up From October Snowstorm Moving Along – Fast Enough?